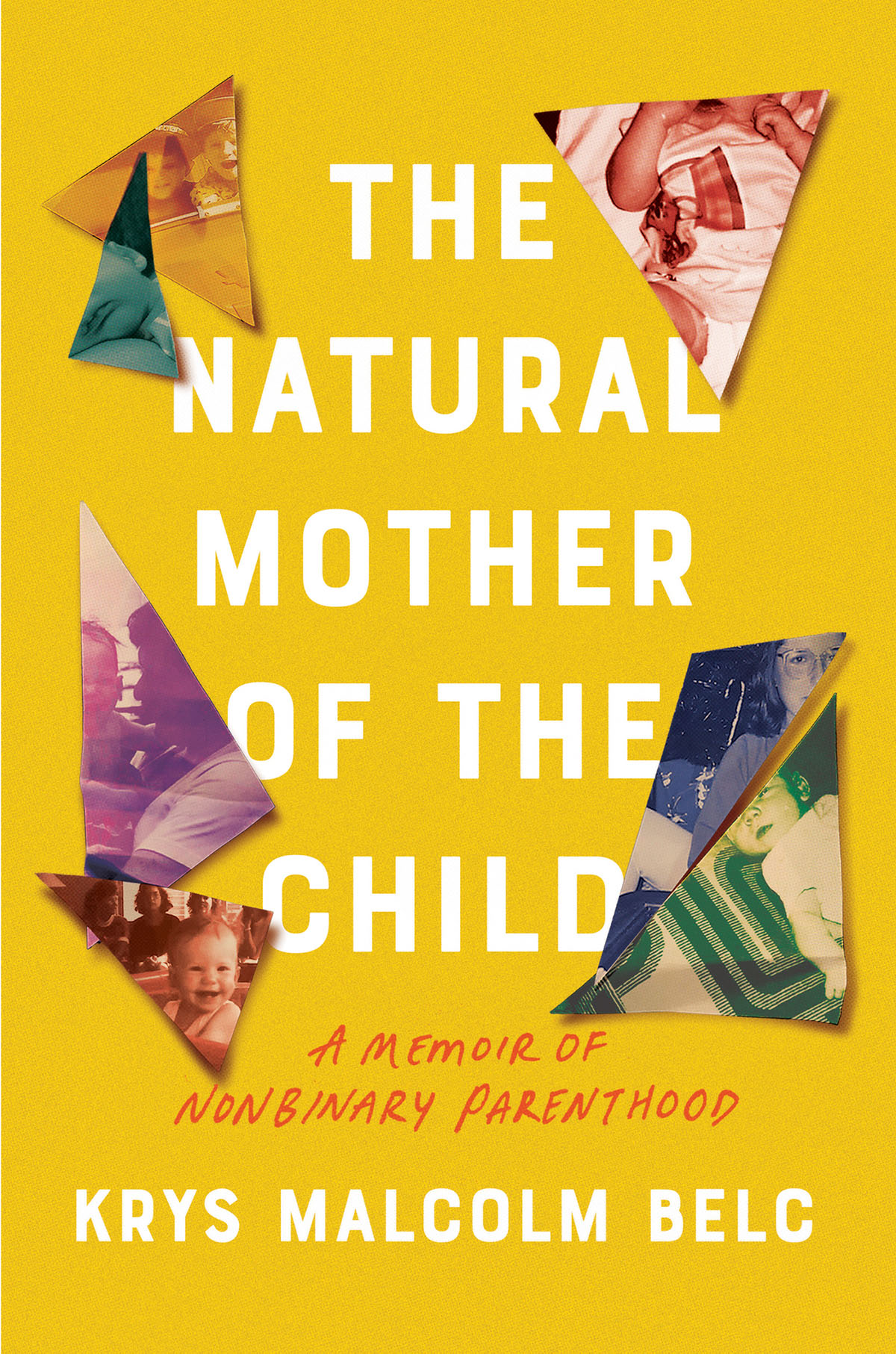 The Natural Mother of the Child

A Memoir of Nonbinary Parenthood

Krys Malcolm Belc has thought a lot about the interplay between parenthood and gender. As a nonbinary, transmasculine parent, giving birth to his son Samson clarified his gender identity. And yet, when his partner, Anna, adopted Samson, the legal documents listed Belc as “the natural mother of the child.”

By considering how the experiences contained under the umbrella of “motherhood” don’t fully align with Belc’s own experience, The Natural Mother of the Child journeys both toward and through common perceptions of what it means to have a body and how that body can influence the perception of a family. With this visual memoir in essays, Belc has created a new kind of life record, one that engages directly with the documentation often thought to constitute a record of one’s life—childhood photos, birth certificates—and addresses his deep ambivalence about the “before” and “after” so prevalent in trans stories, which feels apart from his own experience.

The Natural Mother of the Child is the story of a person moving past societal expectations to take control of his own narrative, with prose that delights in the intimate dailiness of family life and explores how much we can ever really know when we enter into parenting.

KRYS MALCOLM BELC’s work has appeared in Granta, Black Warrior Review, The Rumpus, and elsewhere, and has been supported by the Sustainable Arts Foundation. Belc lives in Philadelphia with his partner and their three young children.

The New York Times Book Review, New and Noteworthy
A Harper's Bazaar Best LGBT Book of the Year
A Rumpus Most Anticipated Book of Next Year

"In the crowded genre of memoir about mothering, Krys Malcolm Belc's debut, The Natural Mother of the Child, asks: What do we do with someone who is parenting the child they gave birth to, but is not a mother at all? Where do transgender and non-binary parents fit, especially in a world that is determined to force them into a box labeled 'mother?'. . . [A] necessary and long overdue transmasculine account of carrying and birthing a child . . . The book is not linear in structure, and skews literary and lyrical, told as a collection of fragmented essays. Belc seamlessly weaves in primary source documents with historical references, including the history of ultrasound machines, and of mastectomies to treat breast cancer . . . His experience is far from universal, but nearly everyone can relate to the transformative experience of falling in love—with a person, with a child—and the ways that love can shape our identities." —Britni de la Cretaz, NPR

"It’s hard to think of an endeavor more traditionally gendered than parenting, which makes Krys Malcolm Belc’s memoir of giving birth and raising children as a nonbinary, transmasculine parent all the more necessary. Hopefully, The Natural Mother of the Child will soon be part of a wide array of books encouraging us to appreciate family bonds outside the confines of gender norms." —Emma Specter, Vogue

"Krys Malcolm Belc’s singular memoir-in-essays traces how his experiences conceiving, birthing, and breastfeeding a child helped to clarify his gender identity . . . 'motherhood' doesn’t describe Belc’s own experience of pregnancy and parenting. The Natural Mother of the Child attempts to bridge that gap, offering an alternative interpretation of what it means to grow a family." —Keely Weiss, Harper's Bazaar, A Best LGBT Book of the Year

"In this candid and captivating memoir-in-essays, Krys Malcolm Belc shares his experience of gestational parenthood as a nonbinary, transmasculine person. Funny, gritty and brave, this is a story of self-affirmation unlike any other, but one in which many will see themselves." —Karla Strand, Ms. Magazine

"In exploring these archives and creating his own, Belc renders a brilliant exploration of personal and cultural expectations, where our bodies meet emotion, and what bodies carry, both literally and figuratively. Belc is a gifted storyteller whose personal narrative is engrossing and tender even as he delves into areas of violence and grief, ultimately revealing how his experience with parenthood informed his gender identity." —Sarah Neilson, Shondaland

"Poignant . . . Reminiscent of Maggie Nelson’s Argonauts, Belc’s memoir is both personal and philosophical, resisting mainstream notions of gender and family while exploring the interplay between the body and the self." —Arianna Rebolini, BuzzFeed, Best Summer Books

"When his partner, Anna, adopted his son, Samson, the paperwork listed Krys Malcolm Belc — a nonbinary, transmasculine person — as 'the natural mother of the child.' Belc spins out from that moment in this insightful memoir, which examines the ways in which gender and the body are codified and documented at the institutional level." —Bustle

"Belc’s illustrated memoir-in-essays delves into what the experience of giving birth taught him about the rigidness of medical and legal systems and the deftness of those determined to exist beyond binaries. It’s a powerful, necessary book—one that every single obstetrician should be assigned in medical school." —Evette Dionne, Bitch

"Punctuated by personal photos and documents, Belc's poetic writing renders his depictions of day-to-day family life and mundane domestic tasks compelling. His raw honesty is heartbreaking and, at times, laugh-out-loud funny. This is an absorbing book that challenges preconceived notions about what it means to be a parent. By reading it, one is sure to embark on their own inner journey—considering the pieces of one's life that have impacted their own sense of identity." —Adrienne Urbanski, Bust

"The experience of carrying a baby and giving birth as a transmasculine nonbinary person in a queer relationship is the subject of [Krys Malcolm Belc's] debut, The Natural Mother of the Child: A Memoir of Nonbinary Parenthood. The book finds Belc asking himself, as he put it recently, 'What is it that I was hoping to get out of this? What is the thing that I was searching for when I decided to do this?' Ultimately, Belc doesn’t find or give any easy answers, but the record of his search has its own eloquence and resonance. The Natural Mother of the Child is an intimate look at the myriad ways it is possible to create, maintain and live in a family, as well as a body, and the structures—legal as well as personal—that we rely on to make the world livable for and legible to ourselves and one another." —Zan Romanoff, Romper

"The Natural Mother of the Child offers, along with an ever-surprising, multiform structure, a lesson in courage and tenderness. Above all, it showcases the ability to live in and tolerate discomfort if it is the surest path to your desires. Though the book has its dark moments, it is undergirded by gratitude: 'Some people may have been born in the wrong body; I was not. I was born in a body that gave me the freedom to carry a baby.' Belc’s excavation pushes readers to look deeper at what is natural, what is manmade, and what makes a man." —Emily Pérez, The Los Angeles Review of Books

"Krys Malcolm Belc’s The Natural Mother of the Child: A Memoir of Nonbinary Parenthood presents a collection of essays that investigates how personal growth journeys—such as pregnancy, excavating one’s gender identity, or conceiving a family—can often come in direct conflict with binary, gender-normative, heteronormative social constructs . . . In his investigation, Belc presents evidence beyond the written narrative: sonograms, marriage certificates, birth certificates, adoption paperwork, etc., highlighting the trove of information collected on the individual, sometimes even before birth . . . Belc’s memoir places issues that are 'out of sight, out of mind' for most front and center, providing a snapshot of where we are as a society, and just how far we still have to go to achieve greater inclusivity for all . . . As Belc notes towards the end of [The Natural Mother of the Child], his child Samson 'asks when we can meet other families like ours and I say, honestly, that I do not know.' In this way, Belc’s memoir is a courageous calling: here I am, here we are . . . you are not alone." —Jo Unruh, Lambda Literary

"Krys Malcolm Belc’s memoir The Natural Mother of the Child is a nonlinear exploration of what parenthood means outside the gender binary. In the memoir, composed of a series of interlocking essays, Belc works to get a sense of who he is as a parent by reaching back to his own childhood and delving into how his son Samson has shaped him . . . This is not the story of what it means to be a nonbinary parent in general. This memoir is a journey to discover what it means to be Krys Malcom Belc and, most importantly, what it means to be Samson’s Krys." —Kirt Ethridge, Chicago Review of Books

"The Natural Mother of the Child refuses easy stories or pat answers. Instead, Belc tells a counterstory that resists hegemonic narratives and pushes toward something messier and truer. Belc’s devotion to his son—and especially his bodily devotion—comes through powerfully, a clear signal. By comparison, some of the other signs that supposedly tell us who we are—birth certificates, marriage certificates, adoption certificates—seem desperately incomplete." —Kelly Blewett, BookPage (starred review)

"Belc develops a candid, gritty, tender story that should garner empathy and understanding regardless of a reader’s background. In this multilayered narrative, augmented with black-and-white photos, the author successfully holds readers’ attention all the way through the last poignant line. With vivid rawness, Belc paints an impressionist mural of what it means to be a parent while also birthing his true self.” —Kirkus Reviews (starred review)
Don't miss news & events from Counterpoint Press.
Subscribe to the newsletter today.