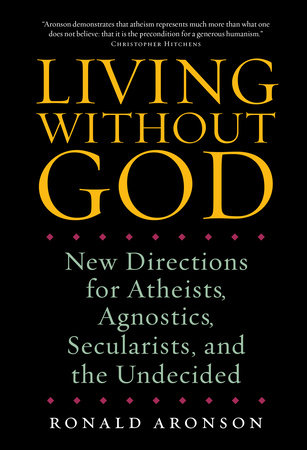 New Directions for Atheists, Agnostics, Secularists, and the Undecided

Ronald Aronson has a mission: to demonstrate that a life without religion can be coherent, moral, and committed. Optimistic and stirring, Living Without God is less interested in attacking religion than in developing a positive philosophy for atheists, agnostics, secular humanists, skeptics, and freethinkers. Aronson proposes contemporary answers to Immanuel Kant’s three great questions: What can I know? What ought I to do? What can I hope? Grounded in the sense that we are deeply dependent and interconnected beings who are rooted in the universe, nature, history, society, and the global economy, Living Without God explores the experience and issues of 21st–century secularists, especially in America. Reflecting on such perplexing questions as why we are grateful for life’s gifts, who or what is responsible for inequalities, and how to live in the face of aging and dying, Living Without God is also refreshingly topical, touching on such subjects as contemporary terrorism, the war in Iraq, affirmative action, and the remarkable rise of Barack Obama.

Ronald Aronson grew up in Detroit and was educated at Wayne State, U.C.L.A., the University of Michigan, and Brandeis University, where he earned a Ph.D. in the History of Ideas. He studied with William Barrett, Page Smith, and Herbert Marcuse. Swept up in the political activism of the 1960s, he became a community organizer in the African American neighborhood of New Brunswick, New Jersey, and an editor of the prominent New Left journal, Studies on the Left. In spring, 1968, as he was completing a doctoral dissertation on "Art and Freedom in the Philosophy of Jean–Paul Sartre," he participated in the "Freedom School" organized in the aftermath of the student strike at Columbia University.

Aronson has taught at Wayne State University since 1968, first at Monteith College, and from 1978 until 2008 in the (now–defunct) Department of Interdisciplinary Studies, a program for working adults. Author or editor of eight books, he is an internationally recognized authority on Jean–Paul Sartre. He has focused above all on the process of Sartre's transformation to a political thinker and activist. He has been Chair of the Sartre Society of North America and founding editor of the journal Sartre Studies International. With support by the National Endowment for the Humanities in 1980 he published Jean–Paul Sartre – Philosophy in the World (Verso); the American Council of Learned Societies supported research for his Sartre's Second Critique (University of Chicago Press, 1987). In 1983–4 he was Research Associate at University College London and in 1987 and again in 1990 he was guest lecturer at the University of Natal and other South African universities. The story of his first experience in South Africa, at the height of the struggle to end apartheid, is told in Stay Out of Politics: A Philosopher Views South Africa (Chicago, 1990). In recognition of his scholarly career and political contributions to South Africa, in April, 2002, he was awarded the honorary degree of Doctor of Laws by the University of Natal, Durban, South Africa.

Winner of several scholarly and teaching awards at Wayne State, Aronson is a past president of its Academy of Scholars, the highest honor bestowed by faculty colleagues. In 2004 the WSU Board of Governors appointed Aronson Distinguished Professor of Humanities, as someone who "is recognized internationally as an author who joins social activism with the history of ideas."

Aronson has produced televised political debates on democratic values and affirmative action (participants included Cornel West, Barbara Ehrenreich, Abigail Thernstrom, David Frum, and Dinesh D'Souza) and has published articles in Dissent, The Nation, The Yale Review, The Chronicle of Higher Education, The Washington Post, The Toronto Star, The International Herald–Tribune, The Times Literary Supplement (London, and The Times Higher Education Supplement (London). He is co–producer of the feature–length documentary film "Professional Revolutionary" about legendary Detroit social and political activist Saul Wellman and, most recently, 1st Amendment on Trial: The Case of the Detroit Six, focused on the Federal government's trial of Communist Party leaders in the '50s. One of his lifelong concerns has been to study and write about the nature of political commitment.

"Ronald Aronson demonstrates that atheism represents much more than what one does not believe: that it is the precondition for a generous humanism.
The two closing chapters are models of stoicism at its best." —Christopher
Hitchens, author of God is Not Great

"As a Christian I applaud my Brother Ronald Aronson for his powerful defense of a courageous and compassionate secular worldview. He is a religiously musical atheist I admire!" —Cornel West

"This book is not just for non–believers. All of us are 'living without God'—at least a loving, personal God. Aronson just shows us how to do it with courage and panache." —Barbara Ehrenreich

"[Living Without God] brooks no argument with religion as religion, but it challenges how the religious right has warped our politics in recent times." —Detroit Metro Times

"A first rate humanist scholar, [Aronson is] intent on showing we don't need belief in god, or in Progress, the Enlightment substitute, to see us through." —Naturalism.org
Don't miss news & events from Counterpoint Press.
Subscribe to the newsletter today.