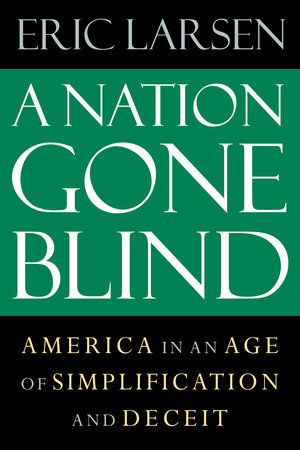 America in an Age of Simplification and Deceit

America’s citizens seem plagued by despair and frustration, much deeper today than the “malaise” President Jimmy Carter noted twenty years ago. Our political and social cultures are driven by issues morally complex and yet presented with simple–minded hostility. What’s the matter with Kansas? What has happened to the once proud leader of the free world? How secure is our future? Does the republic stand or have we lost it already?

Born in 1941, novelist, critic, and teacher Eric Larsen sees his own lifetime as paralleling the arc of a national dissolution, and in three penetrating essays he describes an increasingly desperate situation. A blindness has set in, he argues, producing writers no longer able to write, professors more harmful than helpful, a replacement virtually nation–wide of thinking with feeling while the population seems unable to grasp even the remotest outlines of such dangerous, radical change. In the tradition of George Orwell, Upton Sinclair, Paul Goodman, and Christopher Lasch, Larsen offers an impassioned critique of where we once were, where we are, and where we’re very soon going if we don’t watch out.

Eric Larsen is the author of two novels, An American Memory and I Am Zoë Handke. Retired after teaching English at John Jay College of Criminal Justice for more than thirty years, he lives in Manhattan.