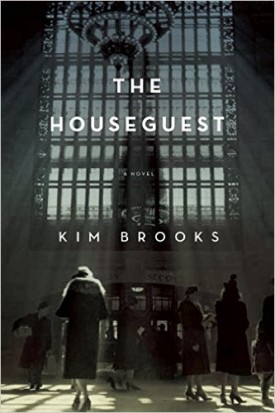 It is the summer of 1941 and Abe Auer, a Russian immigrant and small–town junkyard owner, has become disenchanted with his life. So when his friend Max Hoffman, a local rabbi with a dark past, asks Abe to take in a European refugee, he agrees, unaware that the woman coming to live with him is a volatile and alluring actress named Ana Beidler. Ana regales the Auer family with tales of her lost stardom and charms and mystifies Abe with her glamour and unabashed sexuality, forcing him to confront his own desire as well as the ghost of his dead brother.

As news filters out of Europe, American Jews struggle to make sense of the atrocities. Some want to bury their heads in the sand while others want to create a Jewish army that would fight Hitler and promote bold, wide–spread rescue initiatives. And when a popular Manhattan synagogue is burned to the ground, our characters begin to feel the drumbeat of war is marching ever closer to home.

Set on the eve of America’s involvement in World War II, The Houseguest examines a little–known aspect of the war and highlights the network of organizations seeking to help Jews abroad, just as masses of people seeking to escape Europe are turned away from American shores. It moves seamlessly from the Yiddish theaters of Second Avenue to the junkyards of Utica to the covert world of political activists, Jewish immigrants, and the stars and discontents of New York’s Yiddish stage. Ultimately, The Houseguest is a moving story about identity, family, and the decisions that define who we will become.

Kim Brooks is a graduate of the Iowa Writers' Workshop, where she was a Teaching-Writing Fellow. She has earned fellowships from the Michener-Copernicus Foundation, the Corporation of Yaddo, and the Posen Foundation. Her fiction has appeared in Glimmer Train, One Story, The Missouri Review and other journals, and her essays have appeared in Salon, Buzzfeed and New York Magazine. Her memoir Small Animals (Flatiron/Macmillan) will be published in 2017. She is the personal essays editor at Salon and lives in Chicago with her family.

Praise
"American readers are likely to find themselves haunted by parallels to the current "refugee crisis" in Europe, when we are yet again just far enough removed from the daily struggle to survive, and when we have the luxury to debate our options rather than face excruciating consequences. In these harrowing and beautiful pages, Brooks uses an intricately drawn cast of characters, including a seductive refugee named Ana Beidler, to depict the ambiguities of taking as well as delaying action. By the time we reach the transcendent closing pages of The Houseguest, we realize that a certain consolation may be possible for the living, but it's never quite enough to compensate for the numberless dead. " –Elizabeth Rosner, NBCC

"[A] searing debut novel… The chain of events that follows is tense, emotional, and brilliantly evocative of a tragic time. This is a notable first novel with a voice all its own."—ShoreNews Today

"Kim Brooks weaves a complex story that spans countries, states, and venues… This intricately told novel depicting the minutiae of domestic life and relationships, loss and grief, delves into the dark psychology of the characters and their layered and loaded interactions… The ending of the novel will reward readers with a twist that ties up loose ends but also presents more questions about these characters facing tough situations. Descriptive moments of levity depicting pre–World War II Jewish life in Europe and the Yiddish theater provide a window into a vibrant world and add another layer to this story that keeps the reader guessing until the end."—Jewish Book Council

"Kim Brooks' debut novel The Houseguest offers a refreshing perspective on an often overlooked facet of Holocaust: that of the American Jew… A dramatic tale without the melodrama, Brooks' debut is immersive and bold, and offers, by way of shining light on the domestic side of the war, a welcomed addition to the world of Holocaust literature."—The Jewniverse

"Kim Brooks' first novel reminds us that those who cannot remember the past are condemned to repeat it… Brooks has assembled a compelling cast of characters… [T] his is a powerful book."—Historical Novel Society

"Told with compassion, The Houseguest by Kim Brooks (Counterpoint) is a vibrant debut novel, set in America on the eve of the country's entry into World War II when Jewish refugees are desperately trying to escape Europe. At the outset, a rabbi in Utica, New York convinces a local junk dealer and his family to take in a European refugee, the volatile and charming actress of the book's title. As the characters feel the impact of the war in Europe, they each reach out in their own way to fight."—Jewish Woman Magazine

"…[an] ambitious, wildly successful novel… Manifesting masterful control of her characters and plot, Brooks delivers a titular protagonist who more than carries her weight… The best activist novels weave together personal and political so seamlessly that the reader is equally invested in, and learns as much from, the outcomes of both. "The Houseguest" is one such novel. Bravely choosing one of history's most horrifying milieus as her blackboard, Brooks brings to vivid life the lesson that for better and for worse, people change the world, and the world changes people, and the best we can hope for is that some of the time, those changes are for the betterment of us all."—Chicago Tribune

"Heartbreaking, profound, and brimming with rich historical detail, it's a different kind of Holocaust story, set on American soil in 1941: a time when minding one's own business was the norm, when turning a blind eye allowed genocide to occur right under our collective noses... Her quiet, pre–WWII America demonstrates voyeurism at its finest... In these chapters, it's easy to remember Brooks is a Chicagoan herself. Her descriptions of the city—"smooth and brutal"—demonstrate familiarity and unflinching honesty... Throughout the book, Brooks writes beautiful descriptions that are both stunning and laden with meaning—too many to possibly share here. Yet her prose, as gorgeous as it can be, is never purely aesthetic, because her illustrations of these lives and these cities on the eve of World War II are the heart of her story."—The Chicago Review of Books

"Every image, metaphor, and character is carefully crafted to build a portrait of a vibrant culture and to illustrate that the ultimate inhumanity is ignoring people; the highest good is caring. With the emotional depth and lyricism of Jonathan Safran Foer's Everything Is Illuminated, and the flawed personalities and lavish imagery of Dara Horn's The World to Come, this witty, moving, and literary paean to a people bursts with the depth and magic of a Chagall painting." —Booklist Starred Review

"This sophisticated first novel considers the response by Americans Jews to the ever more insistent evidence of racial conflagration across the Atlantic… [A] timely, psychologically questing debut… Mature in tone and unhurried in pace, Brooks' novel is at its best in its portraits of unhappy men confronted by cataclysmic events in the world and unexpressed longings at home."—Kirkus

""How odd that a novel set in 1941 should be one of the timeliest and most urgent books of 2016. Filled with intrigue and desperation and beauty, The Houseguest isn't just about refugees, but about refuge itself, in all its forms. A bold and gorgeous debut."—Rebecca Makkai, author of The Hundred–Year House

"The Houseguest explores important questions —what is your responsibility to another person? If you could save another from terrible harm, what would you do? Kim Brooks answers through her cast of beautifully drawn, deeply human characters and a story that does not let you go. This is a masterful novel; Kim Brooks is a fantastic writer and this is a necessary and important book." —Karen E. Bender, author of Refund, a Finalist for the National Book Award

"The Houseguest is a vivid and accomplished debut about America in the few months before our entry into the second world war. It resonates powerfully with our complicated and troubling modern age, and Brooks tells not only the sweeping tale of a country grappling with a global crisis but also an intimate story of individuals: what they long for and fear, and what brings them hope and peace, however fleeting." —Edan Lepucki, author of California

"Kim Brooks is a time traveler, a magician, a surgeon of the human psyche. The Houseguest takes the familiar facts of the Second World War and transmutes them into a story that is exquisite, necessary, luminous, and wholly new. This is a book of marvels." —Abby Geni, author of The Lightkeepers

"The Houseguest introduces blazing talent: Kim Brooks invokes the spirit of Malamud, the dialogue of HBO, the vividness of Van Gogh. She explores her difficult subject with grace and ease and not a single emotional misstep. This isn't a book you will be able to put down. At the end, I cried." —Yelena Akhtiorskaya, author of Panic in a Suitcase