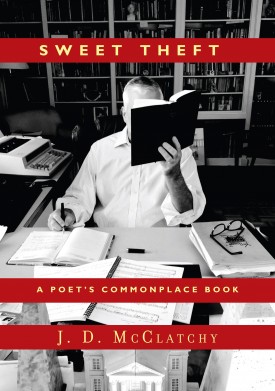 Centuries ago, when books were rare, those who owned them would lend them to friends, who in turn would copy out passages they especially liked before returning the precious book to its owner. These anthologies came to be known as Commonplace Books, and modern writers as different as W. H. Auden and Alec Guinness have kept them as well, recording phrases or passages that struck them as wise or witty or quirky. The result is as much the self–portrait of a sensibility as it is a collection of miscellaneous delights. Renowned poet J. D. McClatchy has been keeping such a book for three decades now. This selection from it offers a unique look into what strange facts, what turns of mind or phrase, what glorious feats of language and nature can attract the attention of a poet.

The great and the obscure are gathered around the same table, exchanging remarkable opinions. Henry James is speaking of Venice: “The deposed, the defeated, the disenchanted, the wounded, or even only the bored, have seemed to find there something that no other place could give.” At the other end of the table, Groucho Marx is playing drama critic: “I didn’t like the play, but then I saw it under adverse circumstances—the curtain was up.” Nietzsche and Flaubert, Dizzy Gillespie and Marianne Moore—dozens of unexpected and timeless aphorisms and anecdotes that pierce and provoke. Many of McClatchy’s own observations about the art and prowess of writing are included as well.

This is a book meant to be sipped, not gulped; meant to be read at leisure and pondered on at length.

J. D. McClatchy has published eight collections of poetry, most recently Plundered Hearts: New and Selected Poems. He is the author of three books of prose, and the editor of dozens of other books, including the influential Vintage Book of Contemporary American Poetry. Called by the New York Times the dean of American opera librettists, his work has been performed at the Metropolitan Opera, Covent Garden, La Scala, the San Francisco Opera and other leading opera houses around the world. He teaches at Yale, where for twenty-five years he has also served as editor of The Yale Review.

Praise
Praise for Sweet Theft "From his choice discoveries-by-quotation J.D. McClatchy has constructed a worldly, quick, literate amusement park or hall of wonders, enchanted by abrupt visions of reality."--Robert Pinsky "Reading Sweet Theft is like having the world's most erudite personal shopper."-- Lorrie Moore, author of Birds of America and Bark Praise for J.D. McClatchy "... McClatchy continues to explore the connection between the spiritual and the corporeal, seeking "a desire as yet half-satisfied." Though he reveres the past and pays tribute to his mentor, James Merrill, the largesse of these poems is the command over craft and language. McClatchy realizes that form and content do matter; what is being said is inherent in how it is being said...Throughout, McClatchy demonstrates a fine linguistic control...In the end, these poems come to represent our own lives, our own longings, our own "flag of surrender" to the spiritual. A brilliant testament to McClatchy's place among American poets." -Library Journal "Technically and emotionally sophisticated, McClatchy's previous three collections (The Rest of the Way, etc.) drew readers in with their conversational brio, and rewarded them with a wisdom that was sad and compromising, sinned against and sinning. The same is true of his brilliant new collection--not least the sinning...The intimacy of these poems, taken together with their classical control and ironical self-knowledge, confirms McClatchy as one his generation's brightest stars. -Publishers Weekly "Powerful . . . Given McClatchy's formal virtuosity, I wouldn't be surprised to learn he jots his grocery lists down in terza rima, too." --The New York Times Book Review "Although these poems lament the smarts and humiliations attendant on love and loss, they provoke the kind of wonder and joy we experience when the curtain comes down on a dazzling performance." --The New Leader