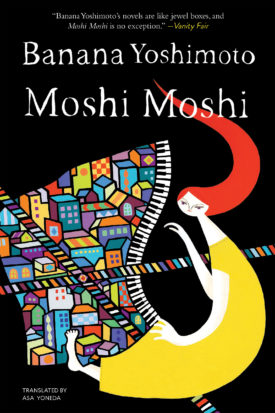 “Banana Yoshimoto’s novels are like jewel boxes, and Moshi Moshi is no exception.” —Vanity Fair

“Yoshimoto’s beguiling evocations of life’s small details...make Moshi Moshi is a joy to read.” —The National

“An unlikely, engrossing Tokyo ghost story...You won't be able to take your mind off it.” —Marie Claire

“An intimate portrayal of grief and recovery...Yoshimoto’s beautiful imagery—the cherry tree in front of the Les Liens bistro where Yochan works, restaurants glowing late at night, the coziness among the restaurant staff members, all captures the spirit of Shimokitazawa and marks Yochan’s slow return to an anchored life...The translator, Yoneda, enables English readers to fully appreciate Yoshimoto’s subdued, yet sharp, rendering of a young woman emerging from grief and moving forward with her dreams.” —Booklist

“Yoshimoto offers another story of youth, grief, and redemption in this ephemeral yet lovely portrait of an unformed woman...[a] pressing emotional alchemy emerges that leaves everyone changed at the end...A fleeting portrait of a critical moment in a young woman's life, one with which the late John Hughes might have felt some kinship.” —Kirkus