Five Questions for Todd Robert Petersen, author of It Needs to Look Like We Tried

Five Questions for Todd Robert Petersen, author of It Needs to Look Like We Tried 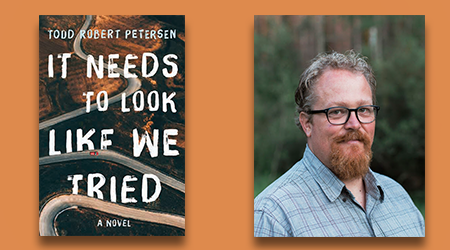 How did you come to write this book? What’s the story of this story?

Over a decade ago, I sent to a literary agent named Nat Sobel. Nat passed on the collection but praised one story for its dark humor and quirky tone. He suggested that it could serve as the centerpiece of a new work, perhaps a novel in stories. So, that rejection letter was the real starting point for It Needs To Look Like We Tried.

I gathered up all the “novels in stories” I could get my hands on to get a feel for the shape of these things. I also started watching LOST and became obsessed with the show’s use of multiple intersecting plot-lines and major characters from one storyline appearing as minor characters somewhere else. This gave me a structure it wanted to try, but very little else.

That initial story was about a man who hits a dog while driving through the desert to his father’s wedding. This one came to my while I was driving some state highways between Arizona and Los Angeles. Because I have a kleptomaniac imagination, the book grew by the slow accretion of stolen goods. My wife and I bought our first home from an elderly woman. Whenever we would see her in town, she would ask us this creepy question: “How do you like living in my house?” This little bit of menace became the seeds of the “Cape Cod Fear” storyline. While my kids were little, we watched a lot of PBS, which helped me develop the character of Dr. Science and his friend Asa and their arc. One of my former students was on a reality show back when they were first starting. My conversations with him about how the production went (answer: crazy) led to the “Unscripted” storyline.

This kind of writing goes slowly, especially when you’ve got little kids, so it took me a dozen years or more to finish a draft. I was also working on other projects that came a little more quickly. When I finished It Needs To Look Like We Tried, I sent Nat another letter, not a query this time, just a thank you to let him know his rejection had been really productive. A few weeks later Nat sent me an email and asked to see the new book. He read it, brought me on as a client, put me to work re-writing with some excellent notes, then he helped find the book a perfect home. The whole process has been a grand adventure.

I talk about Matthew B. Crawford’s Shop Class as Soul Craft all the time. It’s a down-to-earth philosophical treatise on the history of education, the nature of intelligence, and the value of being able to fix things and work with your hands. I think it should be required reading for every teacher in America. On the fiction end of things, I can’t shut up about Hannah Tinti’s The Twelve Lives of Samuel Hawley. I regularly pull it off the shelf, open it, and read random paragraphs aloud.

Brian Evenson mentored me through my PhD work, encouraging me to read widely and helping me learn to hear the shape of sentences. Once, over a plate of cheese fries, he said, “Every writer needs to think about two things deeply: what it means to write and what it means to be human.” Twenty years later, I still try to think about those things every day. Most of my mentors have been writers and filmmakers. Flannery O’Connor is my north star. She helped me understand how a person of faith could write with such with, grace, wit, and ferocity. Once in a graduate workshop we were asked to reflect on some of our influences. I mentioned the Coen Brothers and talked about how their dark humor, narrative pacing, and use of the grotesque were important to me, but the professor sighed in a way that suggested by mentioning filmmakers I’d just driven another nail into the coffin of civil society.

In my junior year of high school, I told my English teacher, Sister Mary Kay Lambert, that unlike the rest of my classmates I actually loved A Farewell to Arms. She was beside herself with joy and loaned me a copy of The Short Stories of Ernest Hemingway, which I took home, read in a week, then re-read over and over again until it fell to pieces. I never returned it, and I feel so guilty about it.

During graduate school, I was dating a woman who worked as a book repair technician for a large university library. I asked her if she could fix this ruined book for me. She inspected it and told me it would be easier and cheaper just to replace it. I told her the book had sentimental value because I stole it from a nun. She rolled her eyes and agreed to re-bind the book in hardcover, using some beautiful deep blue book cloth and silver embossing on the spine. I eventually married that book repair technician and dedicated It Needs to Look Like We Tried to her.

Recently I took out the book and re-read “The Short Happy Life of Francis Macomber,” which is one of my favorite Hemingway stories. Holding that beautiful book and reading that beautiful story made me feel like a wretch who should buy the school a new copy of that book then get on my knees and say something like a million Acts of Contrition.