Five Questions for Mary Rakow, author of This Is Why I Came

Five Questions for Mary Rakow, author of This Is Why I Came 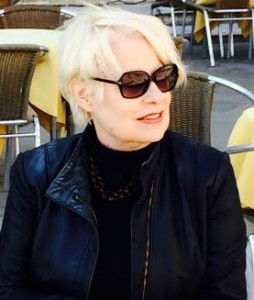 Mary Rakow is the author of This Is Why I Came: A Novel. We ask her five questions.

How did you get interested in writing a novel inspired by biblical stories?

By default. I’d been working on a second novel since The Memory Room came out and it kept failing, year after year. The last time it failed my close reader said he thought the 14 pages I’d written on Zaccheus were really beautiful and he could imagine a book of such interior monologues. I paced around for a few days angry and sad until I remembered how free I felt writing that fragment. So I bought a journal, closed down my computer, sat outside and started to write. The Adam piece came straight out. I wrote about his sense of failure. It kept happening, so that in two months I had all these stories. Very distilled, very finished. I didn’t realize until months later that I’d thrown all of the issues I’d been wrestling with in the earlier novel onto these Bible characters. Because they could take it. Because I felt liberty. Art being that way, largely unconscious.

When I finished This Is Why I Came I realized, in a fictive way, it might be part of the current belief/disbelief debate so I read Sam Harris, Christopher Hitchens, Bertrand Russell. Now I’m reading Jacob’s The Death and Life of Great American Cities. Her take on the city is insightful and simply articulated. And the city as a concept is magnificent to me. Like mercy. Or mathematics. These profound acts of the imagination. And the city and the novel have a lot in common.

But the books that are changing my life I’m reading for their photographs. When a friend first showed me a book on the work of architect Jim Cutler I had to leave the bookstore. I was crying because I looked at the metal on the wood, so elemental, so real and true, so free of decoration and distraction and thought, This is how my life could be. Should be. Must be. And with Carlo Scarpa, the notion of architecture as intervention, and the way Scarpa is so self-absenting that you come to see it as his signature, there because he’s so perfectly absent. That pull toward reduction, toward silence. Toward the empty white of the page that contains all language, all speech, all thought, all feeling. That our words must try to stand up to that white, to be worthy. Of course, we fail. But that’s the aspiration.

Reading is so personal, a person so complex, I don’t generally recommend books to people. Plus my responses to things seem odd and sort of out of step with others. But I do inflict my enthusiasms on my friends and they are very gracious!

My first mentor said, Write toward the pain. And write something you could read to a dying person. These are harsh, useful measures and they stay valid. Besides Cutler, Scarpa, Motherwell, again, my new mentor is David Nash. He is a sculptor and his works create silence around them. And you can’t help it. You enter into that silence. This moral, truthful silence. This emptiness in which you feel deeply alive. And this completes the work, “consummates the work” as Nash says, referencing Duchamp. A very nice word choice. The work finds its lover. Then it is fully realized. Then, finally, it is complete.

On a more technical level I learn a lot by walking around the city. It just happens. You’re walking along minding your own business and you see in the Max Mara window something entirely new. A mannequin wearing wheat colored menswear socks with blush suede pumps! You stare at it for an hour, that friction, that juxtaposition, and you go home and write better dialogue because you’ve seen good dialogue with your eyes.

The Bible I received from my Sunday School teacher when I was 5 or 6 and have since lost. We each got one. White for girls, black for boys. The kids who had lots of gold stars on their Bible Memory Work chart and the kids who didn’t have a single star. They were just freely given.

Mine was bound in white leather with a zipper and a small gold cross about ¾” high at the end of the zipper. It was dainty and pliable, serious and private. But it was also not a “Children’s Bible.” It was the complete, unabridged King James version, the very same text the Pastor used, all the adults used. The implication I heard in the object was that my mind was as good as an adult’s, my calling as real, whatever that might be, my existence equally important. It conveyed a radical notion of personhood and I believed that notion and found it to stand up to violence and the other things my childhood contained. The proposition it asserted was that my life could be saved from meaninglessness. I believed it. And the object was beautifully made. Which made sense to me then. I didn’t have the words but I felt it. That the spiritual deserves the aesthetic, its twin.

The simplest, most self-evident things are often the most mysterious. The modesty of Scarpa. That essentialized layering of wood and metal in Cutler. The silence of Nash. That dream of mercy. Of mathematics. Of the city. All these things.