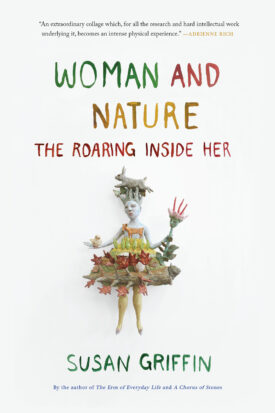 The Roaring Inside Her

In this famously provocative cornerstone of feminist literature, Susan Griffin explores the identification of women with the earth—both as sustenance for humanity and as victim of male rage. Starting from Plato’s fateful division of the world into spirit and matter, her analysis of how patriarchal Western philosophy and religion have used language and science to bolster their power over both women and nature is brilliant and persuasive, coming alive in poetic prose.
Griffin draws on an astonishing range of sources—from timbering manuals to medical texts to Scripture and classical literature—in showing how destructive has been the impulse to disembody the human soul, and how the long separated might once more be rejoined. Poet Adrienne Rich calls Woman and Nature “perhaps the most extraordinary nonfiction work to have merged from the matrix of contemporary female consciousness—a fusion of patriarchal science, ecology, female history and feminism, written by a poet who has created a new form for her vision. …The book has the impact of a great film or a fresco; yet it is intimately personal, touching to the quick of woman’s experience.”

SUSAN GRIFFIN has written over twenty books, including non-fiction, poetry and plays. Her book, A Chorus of Stones: The Private Life of War, was a finalist for the Pulitzer Prize and a New York Times Notable book. Woman and Nature, considered a classic of environmental writing, is credited for inspiring the eco-feminist movement. She and her work have been given many awards, among them a Guggenheim Foundation Award, an Emmy, and the Fred Cody Award for Life Time Achievement by NCBR. She lives in the San Francisco Bay Area.