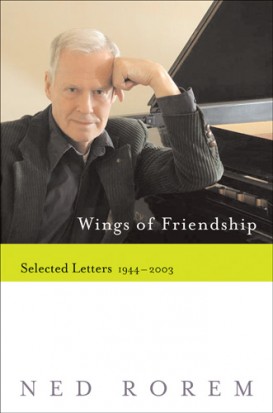 “When it comes to letter writing, do artists resemble their letters? Yes, except when they don’t.” So wrote Ned Rorem in his 1998 review of Prokofiev’s letters. Over the years Ned Rorem has shown us the craft of autobiography in his four five elegant and moving diaries that span the last eighty decades. But besides the publication of his correspondence between himself and Paul Bowles, he has never published the vast correspondence he shared with a sublime mix of people—Leontyne Price, Reynolds Price, Virgil Thompson, Angela Lansbury, Judy Collins, Gore Vidal, Cynthia Ozick. In Wings of Friendship Ned Rorem’s letters to these friends and forty others are assembled in chronological order and reveal the range of his interests and depth of his passions—a heart laid bare, billets doux.

Words and music are inextricably linked for Ned Rorem. Time magazine has called him the world's best composer of art songs, yet his musical and literary ventures extend far beyond this specialized field. Rorem has composed three symphonies, four piano concertos and an array of other orchestral works, music for numerous combinations of chamber forces, ten operas, choral works of every description, ballets and other music for the theater, and literally hundreds of songs and cycles. He is the author of sixteen books, including five volumes of diaries and collections of lectures and criticism.

Praise
"Rorems's openness about his life, his own art, his view of the art of others, his agonizing about the creative process--all if it makes for a remarkable set of entries into a continuing record. These diaries may well turn out to be an enduring twentieth-century document."