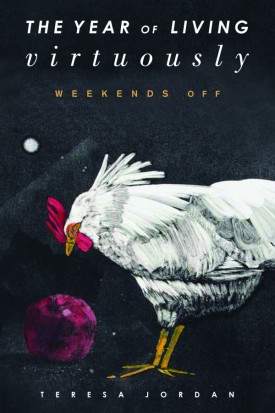 The Year of Living Virtuously

Benjamin Franklin was in his early twenties when he embarked on a “bold and arduous project of arriving at moral perfection,” intending to master the virtues of temperance, silence, order, resolution, frugality, industry, sincerity, justice, moderation, cleanliness, tranquility, chastity, and humility. He soon gave up on perfection but continued to believe that these virtues, coupled with a generous heart and a bemused acceptance of human frailty, laid the foundation for not only a good life but also a workable society.

Writer and visual artist Teresa Jordan wondered if Franklin’s perhaps antiquated notions of virtue might offer guidance to a nation increasingly divided by angry righteousness. She decided to try to live his list for a year, focusing on each virtue for a week at a time and taking weekends off to attend to the seven deadly sins. The journal she kept became this collection of beautifully illustrated essays, weaving personal anecdotes with the views of theologians, philosophers, ethicists, evolutionary biologists, and a whole range of scholars and scientists within the emerging field of consciousness studies. Though she claims to never have aspired to moral perfection, she was still surprised, as was Benjamin Franklin before her, “to find myself so much fuller of faults than I had imagined.” Teresa Jordan offers a wry and intimate journey into a year in midlife devoted to the challenge of trying to live authentically. Through her explorations, we come to understand the ethics of time, the importance of mindfulness, and the profound societal cost of our contemporary epidemic of distraction.
About Teresa Jordan

Teresa Jordan is an artist and author who grew up in a house full of books on an isolated ranch in Wyoming where the love of learning she acquired in the local one-room school carried her to Yale and into a lifetime of inquiry. Her books include the memoir Riding the White Horse Home and two illustrated journals, Field Notes from Yosemite: Apprentice to Place, and Field Notes from the Grand Canyon: Raging River, Quiet Mind. Her first book, Cowgirls: Women of the American West, was one of the earliest books to give voice to contemporary women working on the land. With her husband, Hal Cannon, she created the series The Open Road about the outback American West for public radio's The Savvy Traveler. She now lives in southern Utah near Zion National Park.

"With philosophical dexterity, she explores, searches and scrutinizes commonplace notions of right and wrong....This compelling set of reflections is poetic in its scope, and Jordan's meditations are thought-provoking and insightful"--"Deseret News Reviews"