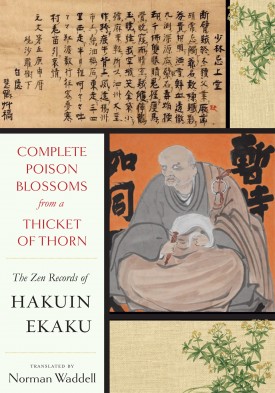 Complete Poison Blossoms from a Thicket of Thorn

The Zen Records of Hakuin Ekaku

Following his translation of just over half the original text in 2014, Norman Waddell presents the complete teaching record of Zen master Hakuin, now available in English with extensive explanations, notes, and even the wry, helpful comments that students attending Hakuin’s lectures inscribed in their copies of the text

With this volume, Norman Waddell completes his acclaimed translation of the teaching record of one of the greatest Zen masters of all time, Hakuin Ekaku (1685-1769). Hakuin lived at a time when Japanese Buddhism as a whole and his own Rinzai sect in particular were at low ebb. Through tremendous force of character and creative energy, he initiated a reform movement that swept the country, and today, all Rinzai Zen masters trace their lineage through him. This outcome is all the more extraordinary because Hakuin’s base of operations was a small temple in the country town of Hara, where he grew up, not in one of the nation’s political, cultural, or commercial centers. This book represents the first full publication of the Keisō Dokuzui in any foreign language. Inspired by the enthusiastic reception that greeted his 2014 selections from the text, Waddell returned to work and now gives us the opportunity to examine the entirety of Hakuin’s record and to benefit as never before from the example and instruction of this exuberant personality and remarkable teacher. Poison Blossoms contains a highly diverse set of materials: formal and informal presentations to monastic and lay disciples, poems, practice instructions, inscriptions for paintings, comments on koans, letters, and funeral orations. While most items are brief, easily read in a quick sitting, the book also includes extended commentaries on the Heart Sutra, one of Mahayana Buddhism’s central texts; on the famously difficult Five Ranks of Tung-shan; and on the accomplishments of his eminent predecessor Gudō Tōshoku. Having devoted himself for more than three decades to the study and translation of Hakuin’s works, Norman Waddell is peerless when it comes to conveying into English the vital, sometimes elegant, often earthy voice of this outstanding teacher. His command of the subject enables Waddell to elucidate the vast array of idioms and images that Hakuin employed to enliven his poetry and prose–historical and mythological elements, street slang, doctrinal and cultural allusions that would otherwise place these writings beyond the grasp of anyone but a specialist. Waddell’s five previous Hakuin translations, each important in its own right, can now be recognized as stepping stones to this towering achievement.
About The Authors

HAKUIN ZENJI was born in Hara, Japan, on January 18, 1685. He began monastic studies as a teenager, studied with the great master Shōju Rōjin, and developed his teaching over a long career spanning more than fifty years. An enormously popular teacher during his lifetime, he died a few days short of his eighty-fourth birthday, in Hara where he had begun, and is said to have left more than 90 dharma heirs.

Hakuin Zenji was born in Hara, Japan in January 18, 1686. He began monastic studies as a teenager, studied with the great master Shiju Rojin, and developed his own teaching with Torei Enji, his first Dharma heir. On enormously popular teacher during his lifetime, he died one day shy of his 84th birthday, in Hara where he had begun, and is said to have left more than ninety dharma heirs.

Norman Waddell was born in Washington, DC in 1940. He studied by University of California, at the Monterey Institute of Foreign Studies, and took his Ph.D at Otani University in Kyoto, where he had lived for many years. He has published more than a dozen books and is considered one of the finest translators of Japanese sacred texts of our time.


NORMAN WADDELL was born in Washington, D.C., in 1940. He has published more than a dozen books and is considered one of the finest translators of Japanese sacred texts of our time.

"Poison Blossoms from a Thicket of Thorn is an authoritative volume translated from Japanese by Norman Waddell; an essential set of texts from the great master Hakuin Ekaku (1685-1769). Hakuin's tireless teaching and writing reinvigorated the ancient Rinzai line of Zen from China which is now a world-wide force. This book serves to illuminate his dry, edgy, practical and often funny way of teaching Zen in the contemporary world." --Gary Snyder, Pulitzer Prize winning author of Turtle Island Praise for The Old Tea Seller: Life and Zen Poetry in 18th Century Kyoto "Norman Waddell has brought us an important Japanese Zen poet who has been too long neglected. The biography is detailed and informative but Waddell has gone further and has translated all of Baisao's published verse (including some taken from holograph manuscript) and prose, as well as many of Baisao's letters and verse... This book will stand as the definitive work on Baisao for many years." --The Zen Site "[A] delightful and exquisite volume... Norman Waddell has done a marvelous job pulling all of this material together." --Spirituality and Practice