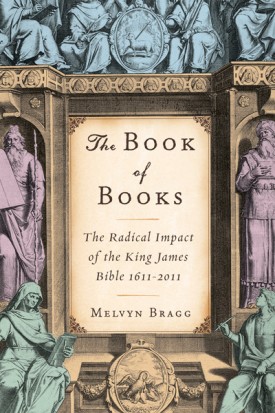 The Book of Books

The King James Bible has often been called the “Book of Books,” both in itself and in what it stands for. Since its publication in 1611, it has been the best–selling book in the world, and many believe, it has had the greatest impact.

The King James Bible has spread the Protestant faith. It has also been the greatest influence on the enrichment of the English language and its literature. It has been the Bible of wars from the British Civil War in the seventeenth century to the American Civil War two centuries later, and it has been carried into battle in innumerable conflicts since then. Its influence on social movements—particularly involving women in the nineteenth and twentieth centuries—and politics was profound. It was crucial to the growth of democracy. It was integral to the abolition of slavery, and it defined attitudes to modern science, education, and sex.

As Lord Melvyn Bragg’s The Adventure of English explored the history of our language, so The Book of Books reveals the extraordinary and still–felt impact of a work created 400 years ago.

Lord Melvyn Bragg is a bestselling author of numerous fiction and nonfiction books, including The Adventure of English. He is the host of the incredibly popular arts program The South Bank Show, which airs in 60 countries including the United States. The show has been on the air, with Bragg as the host, since 1978. He lives in London.

Praise
Praise for The Book of Books

"Bragg consummately proves beyond reasonable doubt that [The King James Bible] is the source of our present use of English." —Business Day

"A potent reminder of how the King James Version has inspired daring thoughts in and out of the pews." —Booklist (starred)

"Bragg writes accessibly, with a gift for storytelling and an engaging style . . . Recommended." —Library Journal