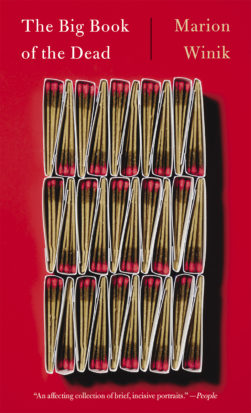 The Big Book of the Dead

Marion Wink is esteemed for bringing humor and wit to that most unavoidable of subjects: death.

At last, Winik’s critically acclaimed, cult favorites, Glen Rock Book of the Dead and Baltimore Book of the Dead, have been carefully combined in their proper chronological order, revealing more clearly than ever before the character hidden throughout these stories: Winik herself.

Featuring twelve additional vignettes along with a brand-new introduction, The Big Book of the Dead continues Winik’s work as an empathetic, witty chronicler of life.

Longtime All Things Considered commentator MARION WINIK is the author of First Comes Love, Highs in the Low Fifties, and eight other books. Her "Bohemian Rhapsody" column at BaltimoreFishbowl.com has received the Best Column and Best Humorist awards from Baltimore magazine, and her essays have been published in The New York Times Magazine, The Sun, and many other publications. She is the host of The Weekly Reader radio show and podcast, based at the Baltimore NPR affiliate. She reviews books for Newsday, People, and Kirkus Reviews and is a board member of the National Book Critics Circle. She is a professor in the MFA program at the University of Baltimore.

Praise for The Big Book of the Dead

"The image that suffused my reading was one of stringing pearls. Each pearl is gorgeous and luminescent . . . Each of them seemed to me better than the one previous to it, and I continued reading even as I wiped away tears . . . Regardless of the proximity of her relation to Winik's subjects, each of these pieces is written with gorgeous turns of phrase and her recognition of the quiet dignity of their lives." --Lorraine Berry, Star-Tribune (Minneapolis)

"Marion Winik's The Big Book of the Dead is a masterclass in flash fiction. It is a grand tapestry of life that you get to see created thread by thread . . . Cathartic and strangely comforting." --Rachel Gonzalez, Paperback Paris