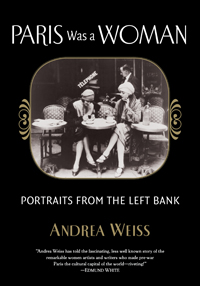 Paris Was a Woman

Portraits from the Left Bank

Originally published more than twenty years ago and winner of a Lambda Literary Award, Paris Was a Woman is a rare profile of the female literati in Paris at the turn of the century. Now with a new preface and illustrations, this “scrapbook” of their work—along with Andrea Weiss’ lively commentary—highlights the political, social, and artistic lives of the renowned lesbian and bisexual Modernists, including Colette, Djuna Barnes, Gertrude Stein, Alice B. Toklas, Sylvia Beach, and many more.

Painstakingly researched and profusely illustrated, it is an enlightening account of women who between wars found their selves and their voices in Paris. A wealth of photographs, paintings, drawings, and literary fragments combine with Weiss’ revealing text to give an unparalleled insight into this extraordinary network of women for who Paris was neither mistress nor muse, but a different kind of woman.

Andrea Weiss is an award-winning documentary filmmaker and nonfiction author. Her most recent book, In The Shadow Of The Magic Mountain: The Erika And Klaus Mann Story won the Publishing Triangle Award for nonfiction. She has been granted fellowships from the National Endowment for the Humanities, National Endowment for the Arts, New York State Council on the Arts, and New York Foundation for the Arts, as well as an Emmy Award for her documentary Before Stonewall. She lives in New York City and teaches at The City College of New York.

Praise
Praise for When Paris Was a Woman

"Andrea Weiss has told the fascinating, less well known story of the remarkable women artists and writers who made pre–war Paris the cultural capital of the world––riveting!" —Edmund White

"[In] Andrea Weiss' enjoyable book... the bohemian world of Paris during the 1920s is more interestingly and accurately conceived as a community of women...She draws on a wealth of research [and] has a professional eye for what a photographic portrait is."—The Times Literary Supplement

"Energetic, discerning feminist scholars continue to introduce us to women of consequence, beckoning them out of the shadows onto the center stage. Andrea Weiss, with the eye of a documentary filmmaker, trains her camera on 28 women of the Left Bank, her "dramatis personae."—Washington Post Book World