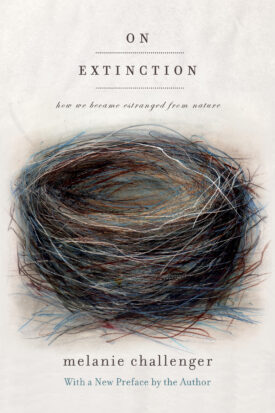 How We Became Estranged from Nature

This hybrid of travelogue and natural science by an award-winning author is truly poetic–now revised with a new introduction and accompanied by the voices of two young activists calling for new kind of relationship to our planet (The New York Times Book Review).

Our era is now dubbed the Anthropocene: The Age of Man. Our species has become the primary cause of the extinction of other life and of the dramatic changes we see across the planet. In her twenties, Melanie Challenger began a series of journeys to explore the link between her own estrangement from nature and these striking transformations. From an exploration of an abandoned mine in England to an Antarctic sea voyage to South Georgia’s old whaling stations, from a sojourn in South America to a stay among an Inuit community in Canada, she began to uncover the connections between human activity and the living world around us. In time, her travels became a loose meditation on extinction, on how losses affect us and why they matter. On Extinction is part travelogue, part environmental history. Woven through her journey are the thoughts of the anthropologists, biologists, and philosophers who have come before her. Drawing on their words as well as firsthand witness and ancestral memory, Challenger traces the mindset that led to our destructiveness and proposes a path of redemption rooted in our emotional responses. This sobering yet illuminating book looks beyond natural devastation to examine why and what’s next.
About Melanie Challenger

Melanie Challenger is the author of Galatea, an award-winning first collection of poems, and co-author, with Zlata Filipovic, of Stolen Voices, a history of twentieth-century conflict compiled through war diaries. She has received a British Council Darwin Award for her work. She lives in the Scottish Highlands.

Praise
On Extinction is a strange hybrid of travelogue and natural science, misted over with a wanderer's lonesome observations of a world in the process of disappearing . . . Amid this solid research, there is fine and truly poetic prose. --The New York Times Book Review A deep look at the human capacity for extinction twined with roamings to the far ends of the earth, from poet and fledgling natural historian Challenger . . . She has a rangy curiosity that extends well past ignorance and alienation as the sole agents of the man-made extinction . . . A formidable inquiry into why the marvels of nature and the distinctiveness of cultures are constantly imperiled.--Kirkus Reviews Erudite and impassioned, Melanie Challenger's On Extinction is a ruminative examination on the way our 21st century world is changing quickly . . . A timely and important book, On Extinction will make you think, one of the finest things a book can do. --The Dallas Morning News [Challenger] has a keen awareness of how the past is layered beneath the present, and how transient both natural and human systems are... [On Extinction] lets the reader observe a creative and intelligent mind at work on problems that face all of us. --Columbus Dispatch