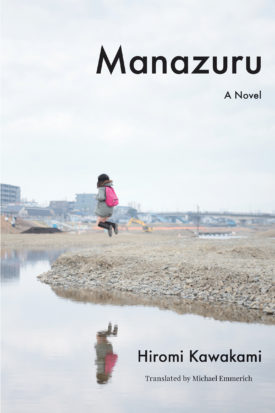 Both startlingly restless and immaculately compact, Manazuru paints the portrait of a woman on the brink of her own memories and future.

Twelve years have passed since Kei’s husband, Rei, disappeared and she was left alone with her three–year–old daughter. Her new relationship with a married man—the antithesis of Rei—has brought her life to a numbing stasis, and her relationships with her mother and daughter have spilled into routine, day after day. Kei begins making repeated trips to the seaside town of Manazuru, a place that jogs her memory to a moment in time she can never quite locate. Her time there by the water encompasses years of unsteady footing and a developing urgency to find something.

Through a poetic style embracing the surreal and grotesque, a quiet tenderness emerges from these dark moments. Manazuru is a meditation on memory—a profound, precisely delineated exploration of the relationships between lovers and family members.

Michael Emmerich is the translator of several books. He holds a PhD in Japanese Literature from Columbia university and was a Costen Postoctoral Fellow at Princeton University.

“In Kawakami's first novel to be translated into English, a woman fades in and out of the present as she visits the beach town of Manazuru, in the shadow of Mt. Fuji. Kei's husband disappeared when their daughter, Momo, was three. Momo is now 12 and lives with Kei and Kei's mother in Tokyo. Moments shared among the women are pleasant but awkward, due to three generations of unspoken resentment. Some jarring transitions aside, Kawakami's handling of temporal space feels authentic: as Kei kisses her lover in one time and place, the wetness leaves her lips in another; she sits alone on a bench in Tokyo. The real and the fantastical meld as Kei narrowly avoids disaster (she escapes the typhoon that destroys the restaurant where she was dining). Her memories are startlingly vivid, yet their veracity remains uncertain; are the visions she has of her husband with another woman real or imagined? Kawakami has a remarkable ability to obscure reality, fantasy, and memory, making the desire for love feel hauntingly real.” —Publishers Weekly

"It's one of those unexpected titles that wear better with time; it needs to sort of 'sit' after reading to fully appreciate.” —Smithsonian Asian Pacific American Center

“The Manazuru of Kawakami's is a dream state as much as a place, a seaside town visited often by the restless narrator, Kei. Kei's husband vanished more than a decade ago, and only now, living in Tokyo with her mother and sullen 16–year–old daughter, is she compelled to put his memory to rest. Kei is haunted not only by her husband but also inexplicably by other shadow–like entities. She is drawn again and again to Manazuru, where she enters a world where time stops, sound evaporates, women hang from trees, boats spark into flame and disappear, and ghosts come and go like smoke. Yet the fantasy has purpose as a manifestation of Kei's sense of displacement, and of her estrangement from her daughter and mother. The action convincingly moves in waves between Kei's past and present, the surreal and the everyday. Part ghost story, part meditation on life and death, family and self, this slim novel is captivating and suspenseful, and sure to satisfy not only fans of ghost fiction but all readers.” —Booklist

Praise for Strange Weather in Tokyo (previously published as The Briefcase)

“I'm hooked on [this] sentimental novel about the friendship, formed over late nights at a sake bar, between a Tokyo woman in her late thirties and her old high school teacher... I can only imagine what wizardry must have gone into Allison Markin Powell’s translation.” —Lorin Stein, The Paris Review Daily

“In quiet, nature–infused prose that stresses both characters' solitude, Kawakami subtly captures the cyclic patterns of loneliness while weighing the definition of love.” —Booklist

“In its love of the physical, sensual details of living, its emotional directness, and above all in the passion for food, this is somewhat reminiscent of Banana Yoshimoto's Kitchen.” —INDEPENDENT, (UK)

“Each chapter of the book is like a haiku, incorporating seasonal references to the moon, mushroom picking and cherry blossoms. The chapters are whimsical and often melancholy, but humor is never far away.... It is a celebration of friendship, the ordinary and individuality and a rumination on intimacy, love and loneliness. I cannot recommend Strange Weather in Tokyo enough, which is also a testament to the translator who has skillfully retained the poetry and beauty of the original.” —The Japan Society

“Strange Weather in Tokyo is a tender love story that drifts with the lightness of a leaf on a stream. Subtle and touching, this is a novel about loneliness, assuaged by an unlikely romance, and brought to life by one of Japan's most engaging contemporary writers.” —Readings (Australia)

“A dream–like spell of a novel, full of humor, sadness, warmth and tremendous subtlety. I read this in one sitting and I think it will haunt me for a long time.” —Amy Sackville

Praise for Record of a Night Too Brief

“Baffling, unsettling and haunting, these tales have a dreamlike atmosphere, rather like Salvador Dali's pictures—anything can happen.” —The Lady, (UK)

Praise for The Nakano Thrift Shop

“Subtle, graceful, wise and threaded on a quirky humor, this exploration of the connections and disconnections between people kept me smiling long after the last page.” —Julia Rochester, author of The House at the End of the World

“The Nakano Thrift Shop is really a love story, albeit a very offbeat one... A gentle book, full of charm [and] radiating leftfield charisma.” — Emerald Street

“Kawakami has an extraordinarily way of drawing you into her ethereal world where, although nothing really happens, when they do, little transgressions or events cause ripples that spread seamlessly throughout the whole book and stay with you long after the story has finished.” —The Reprobate Magazine, (UK)