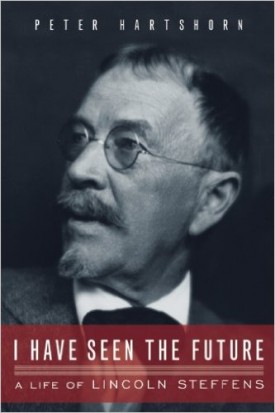 I Have Seen the Future

A Life of Lincoln Steffens

At the dawn of the twentieth century, Lincoln Steffens, an internationally known and respected political insider, went rogue to work for McClure’s Magazine. Credited as the proverbial father of muckraking reporting, Steffens quickly rose to the top of McClure’s team of investigative journalists, earning him the attention of many powerful politicians who utilized his knack for tireless probing to battle government corruption and greedy politicians. A mentor of Walter Lippmann, friend of Theodore Roosevelt, and advisor of Woodrow Wilson, Steffens is best known for bringing to light the Mexican Revolution, the 1910 bombing of the Los Angeles Times, and the Versailles peace talks.

Now, with print journalism and investigative reporters on the decline, Lincoln Steffens’ biography serves as a necessary call to arms for the newspaper industry. Hartshorn’s extensive research captures each detail of Steffens’ life—from his private letters to friends to his long and colorful career—and delves into the ongoing internal struggle between his personal life and his overpowering devotion to the “cause.”

Peter Hartshorn is the author of the internationally-known biography James Joyce and Trieste. He holds an MA in English from Northeastern University. Currently a professor at the Showa Institute, he lives in Boston.

Praise
Praise for I Have Seen the Future

"Absorbing . . . A biography that is prodigiously researched, fantastically interesting and extremely well written. Steffens would have been pleased by how well Hartshorn has turned him inside out." —The New York Times Sunday Book Review

"This outstanding work offers immediate appeal for both students and practitioners of the journalistic art, while those concerned about freedom of the press and the role of investigative journalism will take comfort in Steffens's legacy as artfully told here. Highly recommended." —Library Journal (starred)


Praise for James Joyce and Trieste

"Hartshorn's information is collected not just from the standard sources . . . His research is admirable and, for the foreseeable future, this short, readable book should be the major authority on an extremely important period of Joyce's life." —Choice