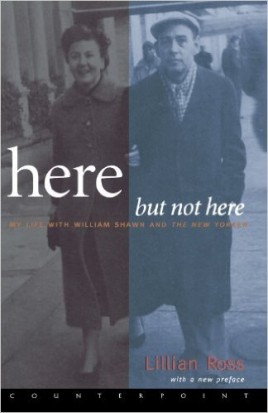 Here But Not Here

In this memoir, a renowned journalist tells the remarkable story of the passionate life she shared for 40 years with William Shawn, legendary editor of The New Yorker. An enduring love, however startling or unconventional, feels unalterable, predestined, compelling, and intrinsically normal to the couple immersed in it, so I would have to say that I had an intrinsically normal life for over four decades with William Shawn. Shawn was married, yet Ross and Shawn created a home together a dozen blocks south of the Shawns’ apartment, raised a child, and lived with discretion. Their lives intertwined from the 1950s until Shawn’s death in 1992. Ross describes how they met and the intense connection between them; how Shawn worked with the best writers of the period; how, to escape their developing liaison, Ross moved to Hollywood – only to return to New York and to the relationship.