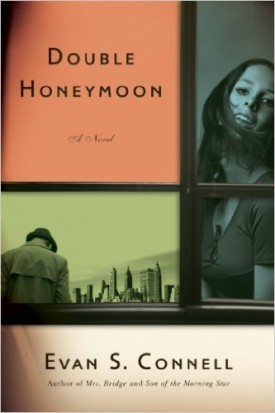 The mysterious bonds between opposites come into sharp relief as we follow the course of Muhlbach and Lambeth’s relationship. An uncomfortable visit to the ballet, an abortive country vacation, brief but sparkling happy moments, and Muhlbach’s final, shocking discovery add up to a mosaic of vignettes, rendering the characters startlingly real.

Double Honeymoon explores the built–in dangers of a love affair between a cautious, conservative, middle–aged widower and a neurotic, high–strung, self–destructive girl. But far from just another May–September romance, the book is a keen examination of the dilemma posed by two people who are attracted to each other, yet unable to come together because of the profound differences in their backgrounds and outlooks. With a sure hand, Evan Connell demonstrates just how profound those differences can be.

"Evan Connell, author of the widely acclaimed Mr. Bridge and Mrs. Bridge, has a sure touch when it comes to taking the pulse of the average quiet–living man. His newest novel charts the course of an extraordinary adventure, the love affair between Karl Muhlbach, father of two, widower, a rather pedestrian insurance executive of middle years, and Lambeth Brent, a beautiful and unpredictable young woman. The affair, because of Lambeth's strange and erratic behavior, is unsettling to Muhlbach, shocks him out of his routinely ordinary life, bewilders him as he tries to deal with the mercurial but always enticing and ultimately tragic Lambeth. Connell's perceptions of the odd pair, of the shadings and intricacies of Muhlbach's feelings as his life is subjected to youth and change are subtly, beautifully and wryly realized. A fine novel of today's Everyman." —Publishers Weekly

"Evan Connell, of course, could not write a graceless sentence . . ." —Kirkus Reviews

"Evan Connell has perfected a style that is all onwardness, losing no richness of detail to the fastness of his pace." —New York Times Book Review

"Connell's style is a model of economy; it reveals the care of an artisan whose works should be collected." —Time Magazine

"(Evan Connell) is a man of such courage and strength of spirit that he has not lost what Alfred Adler calls ‘the nerve for excellence.' " —Harper's Magazine

"Evan S. Connell, Jr., has remained a writer of the first rank through some ten books, a writer's writer." —San Francisco Chronicle