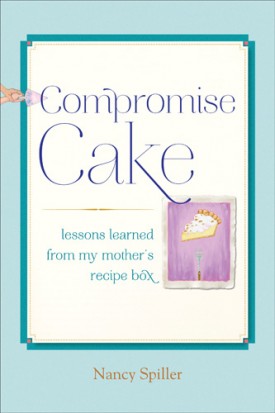 After her mother’s death in 2007, Nancy Spiller discovered her mother’s teaching credential buried in a recipe box. Her mother had taught for only one year before marrying and having four children. Spiller realized that she had probably been her mother’s best and only student in the kitchen.

Compromise Cake explores Spiller’s life in the suburbs in Northern California in the 1960’s, learning to cook by her mother’s side, as remembered through the recipe box. It touches on lineage and industrial changes; it is a meditation on men, women, marriage and the concept of compromise.

What emerges is a portrait of someone whose hopes, dreams and desires for herself as a a career woman, writer, and artist were stifled by the pressure to pursue the conventional female roles of wife and mother, but who found expression through her daughter, an author and artist. A memoir that extends beyond the relationship between Spiller and her mother, the book is universal for all mothers and daughters – and what, as they say, is baked into the cake.

This has been illustrated by the author with more than a dozen color illustrations.

Nancy Spiller is a writer and artist currently living in Los Angeles. A third generation California native, she was born and raised in the San Francisco Bay Area and is a graduate of San Francisco State University. She served as staff feature writer at the San Jose Mercury News and its Sunday magazine, West , and at the Los Angeles Herald Examiner. She was editor and internationally syndicated columnist for the Los Angeles Times Syndicate's Entertainment News Service. Her essays and articles have appeared in numerous magazines and newspapers including the Los Angeles Times Sunday Magazine, McCall's, Mother Jones, Salon.com, and Coagula Art Journal. Her fiction has appeared in the Rain City Review.

She has studied art at the Pasadena Art Center College of Design and UCLA. Her recent installation and exhibition at L.A. Contemporary Gallery in Culver City, Reverse Trash Streams: The Junk Mail Project, featured 157 pounds of shredded junk mail, the result of one year's worth collected at her home, accompanied by her Shredded series of paintings and drawings. Art in America lauded it for its humor, resigned pathos and concern with larger social issues. She lives with her husband Tom, their dog and two cats at the edge of a preserved coastal canyon on Los Angeles' wild western edge.
Praise
Praise for Compromise Cake

"Nancy Spiller dips into her mother's recipe box for a captivating confection of a memoir and out comes the history of sugar, family history, California history and anecdotes both humorous and of the heart. Illustrating the chapters are cozy watercolors in sugary pastels that, taken together with the delightful text, make Compromise Cake a great read and a perfect gift for the holidays. If you want to serve up a treat for your loved ones or just for yourself, this book is it." Susan Sherman, author of The Little Russian

"Nothing in Julia Childs is more telling than Nancy Spiller's mother's passed down instructions for a stolid "compromise cake" that turns out, in Spiller's deft description, to be a recipe for how to endure the hard parts of a woman's life. Ultimately, this lovely and often bittersweet book, reminds us that the food we share, no matter the unhappy provenance of the recipe, can bring us together with the people we never want to forget." Signe Wilkinson, winner of Pulitzer Prize for Editorial Cartooning

"Nancy Spiller understands that there's no one recipe for relationships. But she deftly uses cooking to narrate her own mother's fraught life, offering us a feast of insights on family, culture, and politics along the way. A wise book, written for anyone who appreciates that our past can only begin to make sense if we have the courage to dig into the artifacts we are left with – in Spiller's case, her mother's recipe box – with honesty and courage." Caroline Paul, Lost Cat, Fighting Fire and East Wind, Rain.