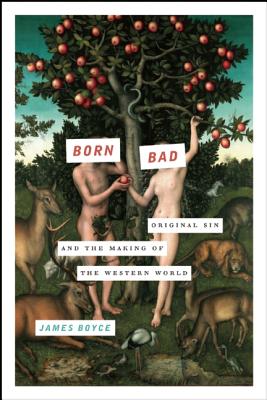 Original Sin and the Making of the Western World

According to the Christian doctrine of original sin, humans are born inherently bad, and only through God’s grace can they achieve salvation. In this captivating and controversial book, acclaimed historian James Boyce explores how this centuries–old concept has shaped the Western view of human nature right up to the present. Boyce traces a history of original sin from Adam and Eve, St. Augustine, and Martin Luther to Adam Smith, Sigmund Freud, and Richard Dawkins, and explores how each has contributed to shaping our conception of original sin.

Boyce argues that despite the marked decline in church attendance in recent years, religious ideas of morality still very much underpin our modern secular society, regardless of our often being unaware of their origins. If today the specific doctrine has all but disappeared (even from churches), what remains is the distinctive discontent of Western people—the feelings of guilt and inadequacy associated not with doing wrong, but with being wrong. In addition to offering an innovative history of Christianity, Boyce offers new insights in to the creation of the West.

Born Bad is the sweeping story of a controversial idea and the remarkable influence it still wields.

James Boyce is the multiple award-winning author of 1835 and Van Diemen's Land. He has a PhD from the University of Tasmania, where he is an honorary research associate of the School of Geography and Environmental Studies.

Praise
"Boyce provides a solid, albeit complex, description of the presence of original sin concepts . . . the book has tremendous merit in its presentation of a nearly 2,000–year history of a major aspect of the Western intellectual tradition."—Choice

"Born Bad is one of the best books on the history of the evolution of Christianity and its ideology. It is beautifully written and very well argued. This book is a necessary read for all those who are interested in Christianity, its evolution, and its history."—Washington Book Review

"[Born Bad] makes a compelling argument...an engrossing study...Boyce leads us into new understandings of some of the central figures in Western culture....This is an exceptional, highly recommended work, innovative and creative in surprising ways."—Publisher's Weekly Starred Review

"Boyce covers a lot of ground and explores a number of authors in this wide–ranging treatment, and the result is impressive. Readable and comprehensive, the book provides worthwhile food for thought. Boyce successfully illustrates the ability of original sin to dominate Western culture for nearly two millennia."—Kirkus

"Born Bad is one of the best books on the history of the evolution of Christianity and its ideology. It is beautifully written and very well argued. This book is a necessary read for all those who are interested in Christianity, its evolution, and its history." —The Washington Book Review