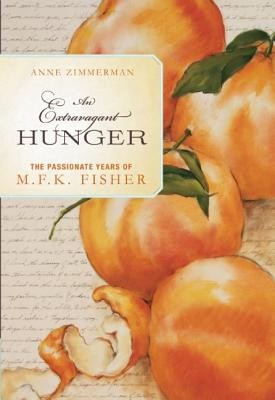 The Passionate Years of M.F.K. Fisher

In An Extravagant Hunger, time slows and is relished, and the turning points and casual strolls of M.F.K. Fisher’s life are unwrapped and savored. From the Berengaria that washed her across the sea to France in 1929, to Le Paquis, the Swiss estate that later provided a backdrop for some of the most idyllic and fleeting moments of her life, the stories of Fisher’s love for food and her love for family and men are meticulously researched and exquisitely captured in this book. Exploring Fisher’s lonely and formative time in Europe with her first husband; her subsequent divorce and re–marriage to her creative sparkplug, Dillwyn Parrish, and his tragic suicide; and the child she carried from an unnamed father, the story of M.F.K. Fisher’s life becomes as vibrant and passionate as her prolific words on wine and cuisine.

Letters and journal entries piece together a dramatic life, but An Extravagant Hunger steps further, bridging the gaps between personal notes and her public persona, filling in the silences by offering an engaging and unprecedented depth of intuitive commentary. With a passion of her own, Anne Zimmerman is the careful witness, lingering beside M.F.K. Fisher through her most dramatic and productive years.

Anne Zimmerman was born in Salt Lake City, Utah. She holds a BA from Linfield College and an MA from San Diego State, where her thesis was a biographical study of the life of M.F.K. Fisher. She has spent extensive time researching Fisher at the Schlesinger Library at Radcliffe College and is a food enthusiast and contributor to Culinate.com. She lives in San Francisco, California.

Praise
Praise for An Extravagant Hunger

"Zimmerman has captured the passionate apprenticeship and wandering years, with all their turmoil and pleasure interwoven with pain, which created such a marvelous writer and such an enduringly luminous woman." —The Washington Post

"In her sympathetic yet critical biography of the life behind Fisher's celebrated writings, Zimmerman finds a passionate woman defined by 'lifelong hungers' . . . Focused, smart, and engaging." —Publishers Weekly