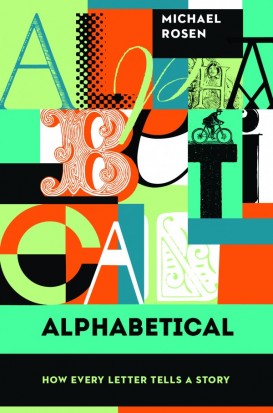 How Every Letter Tells a Story

How on Earth did we fix upon our twenty–six letters, what do they really mean, and how did we come to write them down in the first place? Michael Rosen takes you on an unforgettable adventure through the history of the alphabet in twenty–six vivid chapters, fizzing with personal anecdotes and fascinating facts. Starting with the mysterious Phoenicians and how sounds first came to be written down, he races on to show how nonsense poems work, pins down the strange story of OK, traces our five lost letters and tackles the tyranny of spelling, among many many other things. His heroes of the alphabet range from Edward Lear to Phyllis Pearsall (the inventor of the A–Z), and from the two scribes of Beowulf to rappers. Each chapter takes on a different subject – whether it’s codes, umlauts or the writing of dictionaries. Rosen’s enthusiasm for letters positively leaps off the page, whether it’s the story of his life told through the typewriters he’s owned or a chapter on jokes written in a string of gags and word games. This is the book for anyone who’s ever wondered why Hawaiian only has a thirteen–letter alphabet or how exactly to write down the sound of a wild raspberry.

Michael Rosen is a former Children's Laureate and the bestselling author of We're Going on a Bear Hunt (which won the Smarties Best Book of the Year Award) and many other books. He has also presented Word of Mouth on BBC Radio 4 since 1998. He has a Phd in Education, been awarded five extra honorary doctorates by various universities and made Chevalier de l'Ordre des Arts et des Lettres (Knight of the Order of Arts and Literature) by the French government. In 2013 he became Professor of Education Studies at Goldsmiths. Find out more on Michael's website: michaelrosen.co.uk

Praise
"The book was probably as much fun to write as it is to read. This is a joyous grab–bag of a book."—Longview News–Journal

"His love of language tumbles across the pages of his new book, which is an A–to–Z treasury of linguistic oddities. Reading it is like listening to an erudite uncle hold forth on everything from accent marks to zingers."—Dallas Morning News

"Rosen is curious, enthusiastic and open–minded about how the alphabet should be used, all qualities he inspires in the reader."—Columbus Dispatch

"...voraciously curious...But Rosen is so beguiling, so self–deprecating, so inventive and passionate and funny, that it's hard to begrudge him his enthusiasms. If anyone can make the alphabet a source of boundless awe and wonder, it's the exuberant Rosen, whose fervor is contagious"—Boston Globe

"Readers are likely to find out fascinating tidbits of information about topics they may not have explored before....The overall delivery is solid and comprehensive....It's like Oliver Jeffers's Once Upon an Alphabet for grown–ups." —Library Journal

"Rosen shows a capacious curiosity and imagination in a work that, in lesser hands, would glaze the eyes of all but the most nerdy language freaks.…These initial pages for each letter are informative and good for reference, but the remainder of each section is even better.…A delightfully informative book about letters, their meanings, and the words and meanings we derive from them." —Kirkus, Starred Review

"His beguiling journey through the alphabet will entrance anyone interested in the quirks of language and its history.…Rosen has written a charming and thought–provoking book about what written language represents, how we use it, and the joys and mysteries therein. His humor and obvious love for his subject are winning elements.The individualized graphics of each letter at the start of their respective chapters add an extra note of whimsy and pleasure." —Publishers Weekly, Starred Review

"…engaging exploration…a quirky and informative collection of fun tidbits.…The book entertainingly proves that the ABCs have something to teach us all." —Booklist

"Substantial and engaging." — The Guardian

"Forget party crackers – when you settle down to the turkey and trimmings this year simply make sure you have this book to hand. There's even a chapter devoted to family friendly alphabet games: perfect for playing after the Queen's been on. That letters can and should be fun, not just functional, is one of the main messages of this book." — Sunday Telegraph