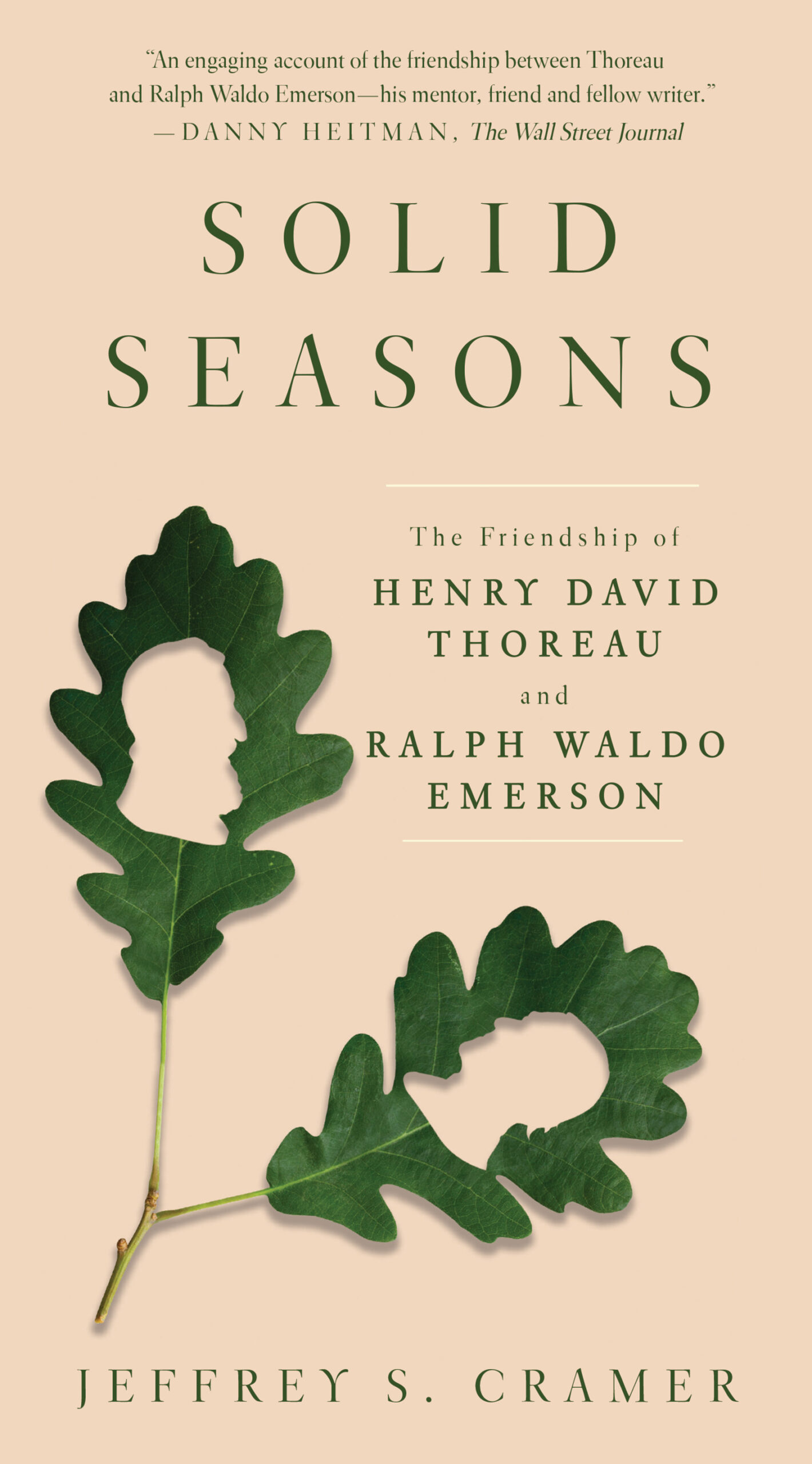 Collecting extracts from the letters and journals of both men, as well as words written about them by their contemporaries, Jeffrey S. Cramer beautifully illustrates the full nature of their twenty–five–year dialogue. Biographers like to point at the crisis in their friendship, focusing particularly on Thoreau’s disappointment in Emerson—rarely on Emerson’s own disappointment in Thoreau—and leaving it there, a friendship ruptured. But the solid seasons remained, as is evident when, in 1878, Anne Burrows Gilchrist, the English writer and friend of Whitman, visited Emerson. She wrote that his memory was failing “as to recent names and topics but as is usual in such cases all the mental impressions that were made when he was in full vigour remain clear and strong.” As they chatted, Emerson called to his wife, Lidian, in the next room, “What was the name of my best friend?”

Jeffrey S. Cramer is the editor of Walden: A Fully Annotated Edition, winner of a 2004 National Outdoor Book Award, and The Quotable Thoreau, recipient of an Umhoefer Prize for Achievement in Humanities. In 2017, Cramer was the historical consultant for the Ken Burns–produced documentary Walden, created for the Walden Pond State Reservation during the Thoreau Bicentennial. Cramer is the curator of collections at the Walden Woods Project’s Thoreau Institute Library. He lives in Maynard, Massachusetts.

“An engaging account of the friendship between Thoreau and Ralph Waldo Emerson—his mentor, friend and fellow writer.” —Danny Heitman, The Wall Street Journal

“Jeffrey S. Cramer describes how, as in all long friendships, the pair had their sunny and overcast days as well as periods of revelation and frustration . . . Each helped the other see himself—both strengths and limitations—more clearly.” —Bob Blaisdell, The Christian Science Monitor

“Solid Seasons is the patient mastery of an enormous body of work . . . The book slowly sifts and sorts and reshapes how we understand each man . . . It’s an idiosyncratic book, a minimalist history, Thoreauvian in its desire to be just as it is, generous in the way it bares itself, full of trust that readers are smart enough to spin conclusions for themselves, and intense in its demand that they elevate themselves to the task.” —Daegan Miller, Los Angeles Review of Books

“Cramer’s lucid, spare writing and deep knowledge join one quotation to the next without seeming effort. The book’s two primary characters become familiars, each one easily approached, often via the observation of the other. Cramer has a knack for choosing and integrating his subjects’ words, and from that you get sentences and stories that are easy walking. That sums to a wonderful read, both for the general reader interested in Emerson and Thoreau, and for those who feel themselves academic family to these two famous 19th–century thinkers and writers.” —Sandy Stott, The Roost

“A balanced account of the relationship between these two great writers . . . Cramer’s attention to detail is clearly in keeping with his excellent reputation as a curator and research librarian.” —Barry M. Andrews, Journal of Unitarian Universalist History

“Cramer (The Quotable Thoreau) intelligently examines the bond between two famous authors in an admirable volume that mixes biography with selections of their writing . . . The words offer inquisitive readers encouragement to refresh their acquaintance with Emerson and Thoreau through this 'new view of an old story.'“ —Publishers Weekly

“Editor of many works by Emerson and Thoreau and curator of collections at the Walden Woods Project's Thoreau Institute, Cramer brings both authority and sensitivity to his biographical overview and to a judicious selection of excerpts from the men's prolific writings . . . A deeply sympathetic dual biography.” —Kirkus Reviews

“The abiding strength of the tie between the two writers emerges as an animating presence in both men’s journals and correspondence, which Cramer mines for quotations that allow each writer to give his own unmediated account of their friendship . . . An illuminating history of an exceptional friendship.” —Booklist (starred review)

“This is a rich cornucopia for Emerson and Thoreau enthusiasts, who will feel the pulse of each man’s heart beat through the words as they come alive on the page.” —Cynthia–Marie Marmo O'Brien, America: The Jesuit Review of Faith & Culture
Don't miss news & events from Counterpoint Press.
Subscribe to the newsletter today.