Nick Neely grew up south of San Francisco, in the oak and chaparral on the bay side of the Santa Cruz Mountains. He holds an MA in Literature and the Environment from the University of Nevada, Reno, and MFAs in nonfiction and poetry from Hunter College and Columbia University. He is the author of two books, Alta California and Coast Range. His nonfiction has appeared in magazines such as Orion, Audubon, Mother Jones, High Country News, Kenyon Review, The Threepenny Review, The Georgia Review, and Ecotone. He is a recipient of PEN/Northwest's Margery Davis Boyden Wilderness Writing Residency, a UC Berkeley–11th Hour Food and Farming Journalism Fellowship, and the 2015 John Burroughs Nature Essay Award. He lives in Hailey, Idaho, with his wife, the painter Sarah Bird. 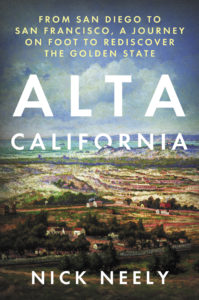 “Rich in little–known history . . . Up the Santa Barbara and San Luis Obispo county coasts, then inland into the Salinas Valley to Monterey Bay. Somewhere along here, the owl moons and woodpeckers do something you might not have thought possible in 2019: they make you fall, or refall, in love with California, ungrudgingly, wildfires and insane housing prices and all . . . What a journey, you think. What a state." —San Francisco Chronicle 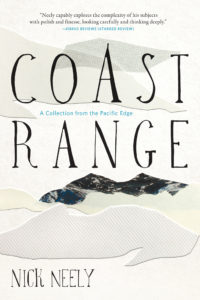 A Collection from the Pacific Edge

Coast: the edge of land, or conversely the edge of sea. Range: a measure between limits, or the scope or territory of a thing. Coast Range, the debut collection of essays from writer Nick Neely, meticulously and thoughtfully dwells on these intersections and much more. The book's title refers to the region in which these essays are set: the California and Oregon coastal ranges. In deeply moving prose equal parts exhilarating and pensive, each essay explores an iconic organism (a few geologic), so that, on the whole, the collection becomes a curiosity cabinet that freshly embodies this Pacific Northwest landscape.

But the book also employs a playful range of forms. Just as forest gives way to bluff and ocean, here narrative journalism adjoins memoir and lyric essay. These associative, sensuous, and sometimes saturnine pieces are further entwined by the theme of "collecting" itself—beginning with a meditation on the impulse to gather beach agates, a semiprecious stone. Another essay follows the journey of salmon from their "collection" at a hatchery through a casino kitchen to a tribal coming–of–age ceremony; a third is a flitting exploration of hummingbirds.