Kevin Allardice was born and raised in the Bay Area, and received his MFA from University of Virginia. This is his first novel. He lives in Oakland, CA. 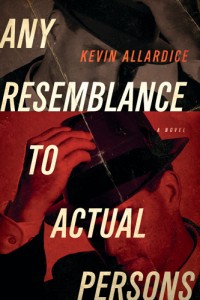 Any Resemblance to Actual Persons

In the spirit of Motherless Brooklyn or Remains of the Day, Allardice offers up a searing and memorable debut.

When Paul McWeeney's older sister writes a book accusing their late father of committing the gruesome Black Dahlia murder, based on memories her new therapist has helped her recover, or imagine, he sits down to write a cease and desist letter to the publishers. Paul hopes to refute his sister's claims about their father's role in the infamous 1947 murder, arguing for his own divergent memory of their Hollywood childhood by way of defending their father's name and legacy. But the letter begins to take on a life of its own, and Paul, a failed novelist and community college writing instructor, soon finds himself on an obsessive, elliptical exploration of both his family's history and his own conflicted memory, which begins to absorb his daily life and threaten his relationships with those, closest to him. The letter becomes not the intended refutation but rather a disturbing and wildly comical psychological self–portrait of man caught between increasingly unstable versions of the past.