Kathleen Dean Moore is the author or co-editor of many books about our moral and emotional bonds to the wild, reeling world, including Earth's Wild Music, Wild Comfort, Moral Ground, and Great Tide Rising. She is the recipient of the Pacific Northwest Booksellers' Association Award and the Oregon Book Award, along with the WILLA Literary Award for her novel Piano Tide. A philosopher and activist, Moore writes from Corvallis, Oregon and Chichagof Island, Alaska. 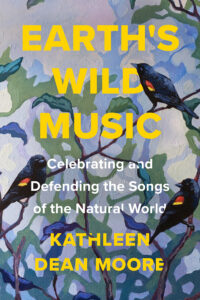 Celebrating and Defending the Songs of the Natural World

At once joyous and somber, this thoughtful gathering of new and selected essays spans Kathleen Dean Moore's distinguished career as a tireless advocate for environmental activism in the face of climate change.

In this meditation on the music of the natural world, Moore celebrates the call of loons, howl of wolves, bellow of whales, laughter of children, and shriek of frogs, even as she warns of the threats against them. Each group of essays moves, as Moore herself has been moved, from celebration to lamentation to bewilderment and finally to the determination to act in defense of wild songs and the creatures who sing them.

Music is the shivering urgency and exuberance of life ongoing. In a time of terrible silencing, Moore asks, who will forgive us if we do not save nature's songs? 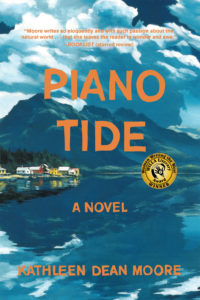 Do we belong to the Earth or does the Earth belong to us? The question raised by Chief Seathl almost two centuries ago continues to be the defining quandary of the wet, wild rainforests along the shores of the Pacific Northwest. It seethes below the tides of the fictional town of Good River Harbor, a little village pressed against the mountains—homeland to bears, whales, and a few weather–worn families.

In Piano Tide, the debut novel by award–winning naturalist, philosopher, activist and author Kathleen Dean Moore, we are introduced to town father Axel Hagerman, who has made a killing in this remote Alaskan harbor by selling off the spruce, the cedar, the herring and halibut. But when he decides to export the water from a salmon stream, he runs head–long into young Nora Montgomery, just arrived on the ferry with her piano and her dog. Nora has burned her bridges in the lower 48, and she aims to disappear into this new homeland, with her piano as her anchor. But when Axel's next business proposition, a bear pit, turns lethal, Nora has to act. The clash, when it comes, is a spectacular and transformative act of resistance. 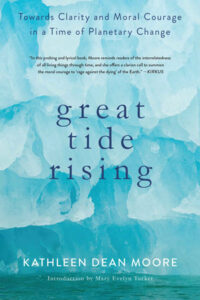 Towards Clarity and Moral Courage in a time of Planetary Change

Even as seas rise against the shores, another great tide is beginning to rise – a tide of outrage against the pillage of the planet, a tide of commitment to justice and human rights, a swelling affirmation of moral responsibility to the future and to Earth's fullness of life.

Philosopher and nature essayist Kathleen Dean Moore takes on the essential questions: Why is it wrong to wreck the world? What is our obligation to the future? What is the transformative power of moral resolve? How can clear thinking stand against the lies and illogic that batter the chances for positive change? What are useful answers to the recurring questions of a storm–threatened time – What can anyone do? Is there any hope? And always this: What stories and ideas will lift people who deeply care, inspiring them to move forward with clarity and moral courage?