David McGlynn grew up in Houston, Texas, and Southern California. His story collection, The End of the Straight and Narrow, won the 2008 Utah Book Award and was named an "Outstanding Achievement" by the Wisconsin Librarians' Association. His stories and essays have appeared in Men's Health, The Huffington Post, Best American Sports Writing, and numerous literary journals. He teaches at Lawrence University in Appleton, Wisconsin, where he lives with his wife and sons.

A lifelong swimmer, he captured a national championship in the 500–yard freestyle at the 2001 United States Masters National Championships. He continues to compete in open–water swimming races all across the country, and on most mornings is the first one in the pool. 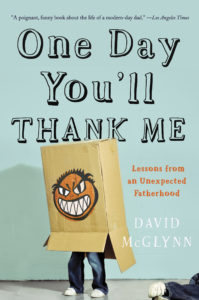 One Day You’ll Thank Me

Lessons from an Unexpected Fatherhood


One Day You’ll Thank Me translates the small, often hilarious moments common among parents of young children, especially dads, into “life lessons” about fatherhood. Comprised of interconnected chapters, the stories invoke a sense of humor and honesty that expand our understanding of what it means to be an American dad. 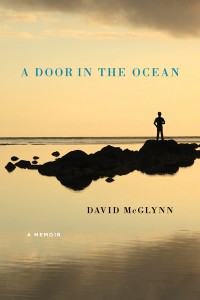 A Door in the Ocean

On a warm September night in 1991, in a quiet neighborhood north of Houston, Texas, David McGlynn's closest friend and teammate on the high school swimming team is found murdered on his living room floor. As the crime goes unsolved and his friends turn to drugs and violence, McGlynn is vulnerable, rootless, searching for answers. He is drawn into the eccentric and often radical world of evangelical Christianity—a journey that leads him to a proselytizing campus fellowship in Southern California, on a mission to Australia, and to Salt Lake City, where a second swimming–related tragedy leaves him doubting the authenticity of his beliefs.

In his post–evangelical life, he finds himself exiled from his parents, plunged into financial chaos, and caught off–guard by the prospect of fatherhood. A new job offers hope for a new beginning, until the possibility of losing his newborn son forces him to confront the nature of everything he believes.

The memoir's concluding chapter, which appeared in The Best American Sports Writing 2009, celebrates the author's love for swimming, the enduring metaphor for his faith and the setting for many of his life's momentous occasions. Rough Water charts the violent origins of one young man's faith and the struggle to find meaning in the midst of life's painful uncertainties.