CHANTAL JAMES lives in Washington, D.C., and has been published across genres—as a poet, fiction writer, essayist, and book reviewer—in such venues as Catapult, Paste, Harvard’s Transition, The Bitter Southerner, and more. James’s honors include a Fulbright Fellowship in creative writing to Morocco and a finalist position for the Alex Albright Creative Nonfiction Prize from the North Carolina Literary Review in 2019. 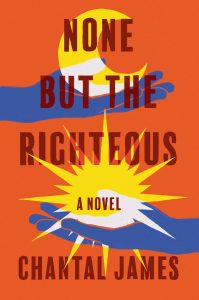 None But the Righteous

Lyrical, riveting, and haunting from its opening lines, None But the Righteous is an extraordinary debut that signals the arrival of an unforgettable new voice in contemporary fiction

"[A] profound debut novel . . . James captures the simple kindnesses of a cup of coffee or a shared cellphone as though they were religious acts. Where a more ponderous writer might lapse into a lengthy stream of consciousness, James uses short chapters to weave a story of fractured time and uncharted space into the fabric of life after Katrina . . . This is a book of faith aching to be claimed, of a land that dares to be redeemed, of souls searching to be free, of all spirits looking for a home. It’s a metaphysical book deeply rooted in ancient legacies of subjugation . . . This is a deeply haunted novel that moves with calm and ruthless determination, like the eye of a hurricane." —The Los Angeles Times


In seventeenth-century Peru, St. Martin de Porres was torn from his body after death. His bones were pillaged as relics, and his spirit was said to inhabit those bones. Four centuries later, amid the havoc of Hurricane Katrina, nineteen-year-old Ham escapes New Orleans with his only valued possession: a pendant handed down from his foster mother, Miss Pearl. There’s something about the pendant that has always gripped him, and the curiosity of it has grown into a kind of comfort.

When Ham finally embarks on a fraught journey back home, he seeks the answer to a question he cannot face: Is Miss Pearl still alive? Ham travels from Atlanta to rural Alabama, and from one young woman to another, as he evades the devastation that awaits him in New Orleans. Catching sight of a freedom he’s never known, he must reclaim his body and mind from the spirit who watches over him, guides him, and seizes possession of him.