ANNABELLE GURWITCH is an actress and the author of I See You Made an Effort (a New York Times bestseller and Thurber Prize finalist); Wherever You Go, There They Are, You Say Tomato, I Say Shut Up (with Jeff Kahn); and Fired! (also a Showtime Comedy Special). Gurwitch was the longtime cohost of Dinner and a Movie on TBS and a regular commen-tator on NPR. She’s written for The New Yorker, The New York Times, Los Angeles Times, The Wall Street Journal and Hadassah amongst other publications. Her acting credits include Seinfeld, Boston Legal, Dexter, and Melvin Goes to Dinner. A veteran of many lauded and even more misguided theatrical productions, she performs with The Moth Mainstage and at arts centers around the country. Gurwitch’s journalism has been recognized with a 2020 The Los Angeles Press Club Award, her work on stage has made The Top Ten Performances of the Year in The New York and Los Angeles Times, and Time Magazine featured Gurwitch in one of their annual 10 Ideas That are Changing the World issues. She lives in Los Angeles and cohosts the Tiny Victories podcast on the Maximum Fun Podcast Network. 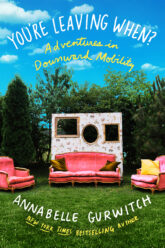