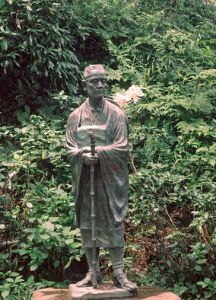 MATSUO BASHO (1644-1694) was the most prominent poet of the Edo period in Japan. During his lifetime, he became recognized as the master of haiku, and his poetry remains world-renowned today; in Japan, many of his poems are immortalized on monuments and traditional sites.  He died in 1694.