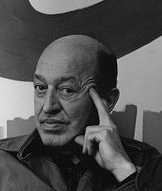 CLEMENT GREENBERG (1909-1994) was an essayist and art critic heavily associated with the American Modern Art movement. He is best remembered as a promoter of expressionism and was among the first critics to praise the work of Jackson Pollock. He died in 1994.