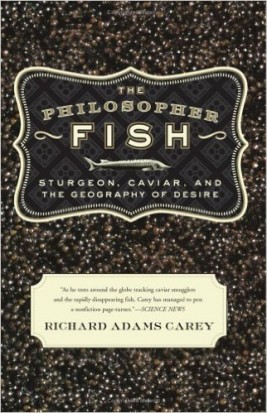 Sturgeon, Caviar, and the Geography of Desire

Since the days of the Persian empire, caviar has trumpeted status, wealth, prestige, and sex appeal. Today it goes for up to one hundred dollars an ounce, and aficionados will go to extraordinary lengths to get their fill of it. According to acclaimed writer Richard Adams Carey, that’s just the problem. In this spectacular jaunt, Carey immerses himself in the world of sturgeon, the fish that lays these golden eggs. What he finds is disturbing. Sturgeon population worldwide have declined 70 percent in the last twenty years, most drastically in the Caspian Sea. The beluga sturgeon, producer of the most coveted caviar, has climbed to number four on the World Wildlife Fund’s most-endangered species list. Armed with a novelist’s eye for human eccentricity and an investigator’s nose for trouble Carey takes us on an illuminating journey across the globe to uncover, the secrets of the sturgeon. On that trek we meet the fascinating real-life characters both profiting from its scarcity and fighting to save it. A high-stakes cocktail of business, diplomacy, technology, and espionage, The Philosopher Fish is, at its heart, the epic story of a 250-million year-old fish struggling to survive.