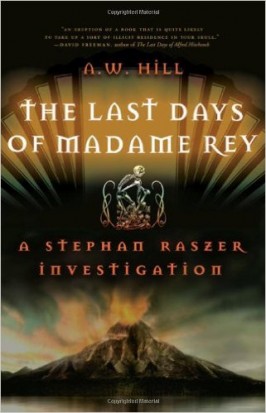 The Last Days of Madame Rey

In The Last Days of Madame Rey, Stephen Raszer—sleuth, scholar, shaman, and private eye—goes to hell and back to save the soul of his client’s son, an ambitious and sexually conflicted young lawyer named Fortis Cohn. Fortis has drifted to the wrong side of the karmic tracks, and Raszer has been hired to free him from the spell cast by a neo–Nazi demagogue. On his quest to expose the spiritual hucksters who have duped Fortis, Raszer encounters more than Old and New World mysticism. A series of eerily unnatural earthquakes is rippling through Northern California, and it’s possible that the cult behind Fortis’s disappearance may be involved. Meanwhile, a cryptic message is left in the hands of a gypsy fortuneteller, and to learn its meaning, Raszer must put his trust in a stunningly sensuous and far too independent–minded operative named April Blessing. He will follow her almost literally to the ends of the earth to unravel the ancient mystery encoded in the gypsy’s message. From its pseudo–gnostic predators to its bedazzled souls, The Last Days of Madame Rey is high on humor, rich on adventure, and injected with addictive, heart–stopping suspense.

About A W Hill

A. W. Hill's first Stephan Raszer novel, Enoch's Portal, won a 2002 Independent Publisher's Association award, and has been optioned by Paramount Studios for motion picture development. He has written two screenplays and authored feature stories on esoteric religion and physics for L.A. Weekly. His short fiction has been featured in Susie Bright's Best American Erotica 2004 and selected for the Eros & Thanatos issue of the Absinthe Literary Review. He is currently director of the MFA program in music composition for the screen at Columbia College, Chicago, and supervises music for films and television.

Praise
"White supremacists, gypsy fortune tellers, a volcanologist, a wise rabbi and an unorthodox private detective are joined in a curious tale.

Stephan Raszer (Enoch's Portal, 2001) is not your typical California gumshoe. A tragedy caused him to rebuild his life right down to a new identity. His latest mission is to extract gay Jewish lawyer Fortis Cohn from his bizarre position as legal advisor to a group of neo–Nazi thugs holed up in a compound on Mt. Shasta. When the mutilated body of Cohn's friend is discovered, Raszer connects him to Madame Rey, a gypsy fortuneteller who eventually hands over a coded message the murdered man left with her after his disquieting Tarot reading. Raszer has arranged to go to Mt. Shasta posing as a geologist helping to monitor the mountain, which has developed disquieting underground activities since the arrival of the neo–Nazis. Raszer's sometime operative, hippie chick April Blessing, cozies up to Bronk Vreeland, leader of the Military Order of Thule, in hopes of opening a crack in the organization Raszer can slip through. What they discover about the group and its activities has alarming global implications. More murders are the least of Raszer's problems as he tries to derail the maniacal organization.

Raszer's case, likely to appeal to fans of mysticism and sci–fi, is a Tolkien–like battle between good and evil that obviously demands a sequel." —Kirkus

"Stephan Raszer is a hero in the grand lineage of sleuths with a taste for the esoteric, who rely on unexpected allies and more than the usual five senses as they dare to tackle extraordinary crimes." —Otto Penzler, founder of The Mysterious Bookshop

"The Last Days of Madame Rey is an eruption of a book that is quite likely to take up a sort of illicit residence in your skull." —David Freeman, author of A Hollywood Education and The Last Days of Alfred Hitchcock

"From the bedrooms of Hollywood to the gates of death, psychic sleuth Stephan Raszer stalks both a killer and a conspiracy through the occult lizard–brain of uppermost California's secret spaces. With his feral and stylish mix of Aleister Crowley and Troma Studios, A. W. Hill has given us a real brain–kick of a book." —Sarah Smith, author of The Knowledge of Water and A Citizen of the Country

"The Last Days of Madame Rey is a ritualistic, apocalyptic mystery that launches a new talent of truly deranged proportions—and I mean that in an earth–shakingly good way. I want to see more of Stephan Raszer." —Christopher Fowler, author of Full Dark House and Ten–Second Staircase

"Nowhere–Land is a tense, odd thriller due to the New Age elements. Stephen is a fabulous hero as he follows clues that lead to a tri–focus where occult power is strong." —Mystery Gazette

"A.W. Hill manages to stake the plot of the soul on top of the plot of the story, making for a page–turner that tries not to be too much more but can't quite help it—guilty and spiritual pleasure dancing on the head of a pin." —Alan Rifkin, author of Signal Hill