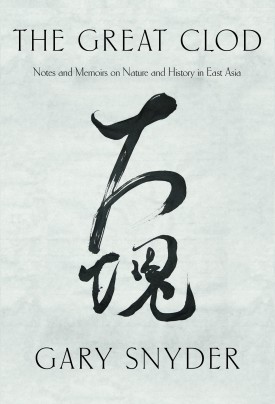 Notes and Memoirs on Nature and History in East Asia

For the full course of his remarkable career, Gary Snyder has continued his study of Eastern culture and philosophies. From the Ainu to the Mongols, from Hokkaido to Kyoto, from the landscapes of China to the backcountry of contemporary Japan, from the temples of Daitokoji to the Yellow River Valley, it is now clear how this work has influenced his poetry, his stance as an environmental and political activist, and his long practice of Zen. Growing up in the Pacific Northwest, Asia became a vocation for Snyder. While most American writers looked to the capitals of Europe for their inspiration, Sndyer looked East. American letters is profoundly indebted to this geographical choice.

Long rumored to exist, The Great Clod collects more than a dozen chapters, several published in The Coevolution Quarterly almost forty years ago when Snyder briefly described this work as “The China Book,” and several others, the majority, never before published in any form. “Summer in Hokkaido,” “Wild in China,” “Ink and Charcoal, ” “Stories to Save the World,” “Walking the Great Ridge,” these essays turn from being memoirs of travel to prolonged considerations of art, culture, natural history and religion. Filled with Snyder’s remarkable insights and briskly beautiful descriptions, this collection adds enormously to the major corpus of his work, certain to delight and instruct his readers now and forever.

Praise
"His newest book of prose, The Great Clod is a series of essays on Asia's ecological history, combining culture and politics in a way that is, unsurprisingly, poetic and graceful. The Great Clod may be slim but its scope is immense."—The Japan Times

"Classical poetry, calligraphy, the best source of temple incense—all figure in the text, which has something of the feel of a valediction. Elegant and thoughtful, with much to read between the lines in commentary on a long life's work. Students and admirers of Snyder will be enchanted and intrigued." —Kirkus

"Each essay furnishes a graceful, very conversational (sentence fragments and all), but keenly well–informed enticement to pursue its subject further. This kind of friendly, even compassionate, mode of instruction comes, of course, from the American arguably most responsible for spreading appreciation of East Asia among North Americans. If this little book should prove Snyder's last word on East Asia, it is wonderfully enough." —Booklist

"Snyder is an elder statesman of the natural world and the tribal unions of poetry. He has a body of work as original as predecessors Williams Carlos Williams and Wallace Stevens."—The Bloomsbury Review

"What thoughtful beauty! How skillfully Gary Snyder interfuses the practical knowledge of an animal sense with story, language, and song. True teachers in American are now an endangered species. I learn so much from this good man's perception, humor, discipline, and love for this world."—James Hillman