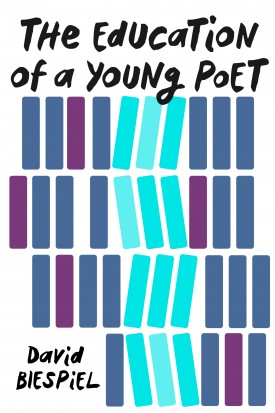 The Education of a Young Poet

“Biespiel’s supple memoir of becoming a poet will surely inspire other writers to embrace the bodily character of writing and feel the power and, sometimes, the emptiness of the act of writing poetry.” —Publishers Weekly (starred review)

The Education of a Young Poet is David Biespiel’s moving account of his awakening to writing and the language that can shape a life. Exploring the original source of his creative impulse—a great–grandfather who traveled alone from Ukraine to America in 1910, eventually settling as a rag peddler in the tiny town of Elma, Iowa—through the generations that followed, Biespiel tracks his childhood in Texas and his university days in the northeast, led along by the “”pattern and random bursts that make up a life.”

His book offers an intimate recollection of how one person forges a life as a writer during extraordinary times. From the Jewish quarter of Houston in the 1970s to bohemian Boston in the 1980s, from Russia’s Pale of Settlement to a farming village in Vermont, Biespiel remains alert to the magic of possibilities—ancestral journeys, hash parties, political rallies, family connections, uncertain loves, the thrill of sex, and lasting friendships. Woven throughout are reflections on the writer’s craft coupled with a classic coming–of–age tale that does for Boston in the 1980s what Hemingway’s A Moveable Feast did for Paris in the 1920s and Broyard’s Kafka Was the Rage did for Greenwich Village in the 1950s.

Restless with curiosity and enthusiasm, The Education of a Young Poet is a singular and universal bildungsroman that movingly demonstrates, “in telling the story of one’s coming into consciousness, all languages are more or less the same.”

DAVID BIESPIEL is the author of A Long, High Whistle, winner of the 2016 Oregon Book Award for General Nonfiction. He has also written five books of poetry, most recently Charming Gardeners and The Book of Men and Women, which was named one of the Best Books of the Year by the Poetry Foundation and received the 2011 Oregon Book Award for Poetry. He writes the Poetry Wire column for The Rumpus. Among his honors are a National Endowment for the Arts Fellowship in Literature, a Wallace Stegner Fellowship, and a Lannan Fellowship. He lives in Portland, Oregon, with his family.

Praise
Praise for The Education of a Young Poet

“Filled with unassuming but riveting observations . . . that show not only how important poetry is to daily life but also how it’s, in fact, inextricable from life. This book will make you appreciate poetry more. And if you’re a poet, it will make you proud to be one.” —The Rumpus

"As a match newly struck, The Education of a Young Poet recovers a dream–like glow of this world . . . The author’s journey restores our sense of the visionary power of language." —The Carolina Quarterly

"Biespiel’s memoir delivers with wit and intelligence exactly the kind of inspiration any young writer requires: A voice and a past and a story to tell."" —Empty Mirror

"In his beguiling voice . . . Biespiel shows himself to be exhilarated as much by failure as by success in writing; his poetry reveals aspects of his inner world to him and shows him how to live better. Biespiel’s supple memoir of becoming a poet will surely inspire other writers to embrace the bodily character of writing and feel the power and, sometimes, the emptiness of the act of writing poetry." —Publishers Weekly (starred review)

"I love the scope of The Education of a Young Poet, which opens fifty years before the author's birth. What better way of expressing the idea that poetry, like all art, is a matter of lineage, growing in equal part out of what we learn and who we are? Indeed, what David Biespiel has in mind here is less a craft book―although there are great craft riffs―than a memoir, a kind of portrait of the artist as a young man. 'Feeling alien within the familiar,' Biespiel describes it, the sensation of being a new poet. It's as good a description as I've seen for the mix of distance and proximity, alienation and empathy, that all art requires, and perhaps most especially that of poetry." —David L. Ulin, author of Sidewalking

"What a memorable, companionable, and singular book. I can't think of another contemporary memoir that has this mix of political and literary intelligence, all embedded in a personal story that is told with great candor, historical consciousness, and wit. How I wish it had existed when I was a young poet!"" —Christian Wiman, author of Hammer Is The Prayer

"Whether he is writing about poetry, politics, competitive diving, or the glories of great conversation, Biespiel’s recurring subject is the tension between freedom and discipline―between the sublime release of our own wildness and the precision that comes only from exquisite self–control. Part memoir, part ars poetica, The Education of a Young Poet is a feast: of language, of memory, and of insights into how one young writer came into his own."—Patrick Phillips, author of Blood at the Root and Elegy for a Broken Machine