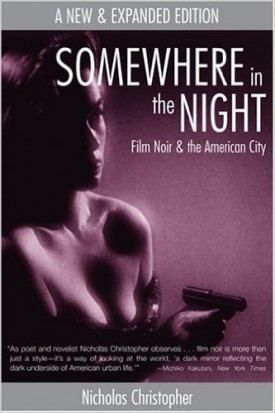 Somewhere in the Night

Film Noir and the American City

Starting with the classic Out of the Past, Christopher takes us on the grand tour of the great film noirs. With style and humor, he identifies the genre’s central motif — “The city as labyrinth is key to entering the psychological and aesthetic framework of the film noir” — and goes on to analyze more than three hundred films from 1940 to the present. Imbuing the language of film with the lyricism so praised in his novels, Christopher draws from his vast knowledge of literature to explore the genre’s numerous influences. (Although it was a French critic who coined the term “film noir,” Christopher argues that Americans had been shooting films in the genre years even before the term was invented.) Citing cultural, social, and historical influences from all over the world, he effortlessly guides us through the labyrinth.

This edition includes a new afterword and expanded filmography, making this bold and thoroughly researched book more relevant and comprehensive than ever.

Nicholas Christopher is the author of seventeen books: eight previous volumes of poetry, most recently, Crossing the Equator: New & Selected Poems; six novels, including The Soloist, Veronica, and A Trip to the Stars; a nonfiction book, Somewhere in the Night: Film Noir & the American City; and a novel for children, The True Adventures of Nicolò Zen. He lives in New York City.

Praise
"Intellectually stimulating, thoroughly researched and excellently written. Christopher writes with the mind of a scholar and the heart of a poet....This fascinating book will be a treat for film buffs, film professionals and everyone in between."--"Publishers Weekly