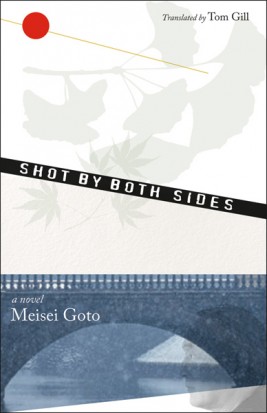 Shot by Both Sides

Critically acclaimed when first published in Japanese, the late Meisei Goto’s novel Shot by Both Sides climbs inside a mind forever wounded by the childhood trauma of war, following one man’s pursuit of his own history through an intense stream of consciousness with loops, flashbacks, and multiple digressions. Akaki, a middle–aged Japanese man in a business suit and overcoat, stands on a bridge in Tokyo, waiting for a friend to show up for an appointment. He recalls how he awoke that morning, suddenly overwhelmed with a desire to locate the military greatcoat he was wearing when he first arrived in Tokyo from his hometown in rural Kyushu twenty years before. Memories of the day he has just spent fruitlessly searching for the coat mingle with memories of his lonely, lust–drenched teen years as a poor country boy in Tokyo—and with older memories from his childhood in northern Korea under Japanese colonial rule, when his dreams of becoming a military hero were lost along with his father in Japan’s defeat. Shot by Both Sides is an enlightening adventure of introspection and a stylistic triumph of unique power.

Meisei Goto fled North Korea during his adolescence and became a student of Russian Literature at Japan's Waseda University. He is the prizewinning author of over thirty books, and remained in Japan until his death in 1999.