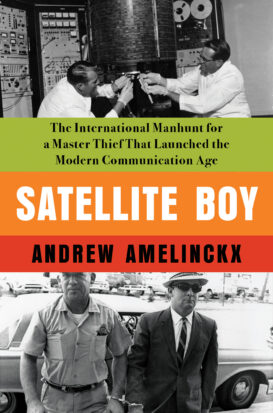 A Huge Heist, a Worldwide Hunt for a Master Criminal, and the Other Space Race

Spanning the underworld haunts of Montreal to Havana and Miami in the early days of the Cold War, Satellite Boy reveals the unlikely connection between an audacious bank heist and the “other Space Race” that gave birth to the modern communication age

On April 6, 1965, Georges Lemay was relaxing on his yacht in a south Florida marina following one of the largest and most daring bank heists in Canadian history. For four years, the roguishly handsome criminal mastermind hid in plain sight, eluding capture and the combined efforts of the FBI, Interpol, and the Royal Canadian Mounted Police. His future appeared secure.

What Lemay didn’t know was that less than two hundred miles away at Cape Canaveral, a brilliant engineer named Harold Rosen was about to usher in the age of global live television with the launch of the world’s first twenty-four-hour commercial communications satellite. Rosen’s extraordinary accomplishment would not only derail Lemay’s cushy life but change the world forever.

Brimming with criminal panache and technological intrigue, and set against a turbulent and iconic period that includes the moon landing and the civil rights movement, Satellite Boy tells the largely forgotten, high-stakes story of the two equally driven men who inadvertently launched the modern era.