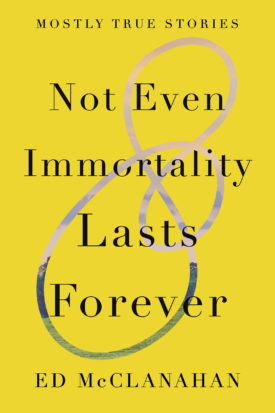 Not Even Immortality Lasts Forever

McClanahan crafts his coming–of–age tales with comic wit and refreshing honesty, inviting readers to relive the memories that shaped his character and career—from hilarious childhood antics in small–town Kentucky to eye–opening adventures on the West Coast

A good story has a mind of its own; it seeks its truth the way water seeks its own level. But where is the line between memory and imagination, between nonfiction and the telling of a good story? In the mostly true stories that make up Not Even Immortality Lasts Forever, Ed McClanahan intrepidly tests the limits of that distinction.

This gathering of fiction–infused autobiographical stories opens in the postwar 1940s with the sudden, brief appearance of an itinerant street performer in McClanahan’s sleepy rural Kentucky hometown, an elderly bicyclist whose artistry seems, to the fourteen–year–old narrator, almost divinely inspired. Subsequent stories trace McClanahan’s uneasy but ultimately tender relationship with his no–nonsense “bidnessman” father and, simultaneously, his growing awareness of his own calling as a writer. McClanahan writes his way into the fabled Stanford University Creative Writing Program and forms lasting friendships with Ken Kesey and his then–notorious cohort, the Merry Pranksters.

After returning to Kentucky in the 1970s, McClanahan published his long–awaited novel, The Natural Man, in 1983, the first of seven well–received books. In 2019, he was inducted into the Kentucky Writers Hall of Fame.

“This may be Ed McClanahan’s best book yet. Never again can I say that I don’t laugh out loud—or walk around reciting to the closest human—while reading a book. This memoir belongs on the same shelf as Nordan’s Boy with Loaded Gun and the works of David Sedaris. What a great, comical joyride by a large–hearted man.” —GEORGE SINGLETON

Praise
Praise for Not Even Immortality Lasts Forever

“Moving . . . McClanahan . . . lures the reader—with his trademark jocularity and bountiful prose—through the wistful banalities of a midcentury, middle–American boyhood. His anecdotes wind together, flowing almost associatively . . . The book, taken as a whole, performs a genuinely beautiful act of post hoc portraiture, eventually building into a protracted study of McClanahan's relationship with the erosive nature of time and the happy–sad miracles of memory. How much is fiction? How much is memoir? Who cares: It's joyous.” —Kirkus Reviews

“Former Merry Prankster McClanahan has earned a respectable following for his mischievous wordplay and oblique storytelling . . . Fascinating . . . His conversational style and frank humor imbue these pieces with wisdom and charm.” —Booklist

“This book is all over the map—in the best possible ways. Long admirers of McClanahan don't want McClanahan Bound. We want him, as here, available in all his florid, wide–ranging, unpredictable, savvy, and sassy (and, I'm sorry, yes, extremely humane) abundance. Somewhere in him resides the restless, extravagant spirit of Mark Twain.” —Richard Ford

“I happened to be waiting in a federal jury room when I started reading Ed McClanahan’s latest accounts ranging from his childhood escapades, his many friendships, and most certainly the appealing characters of his hometown. This would not be recommended reading in that setting, as I couldn’t help but chuckle on almost every page . . . McClanahan notes that these stories are 'mostly true,' and we all know that the truth is stranger than fiction. But, a clever storyteller can embellish a memoir with a few fictional details that vary from audience to audience and achieve delightful entertainment. Of all of the 642 residents of Brooksville, Kentucky, McClanahan is likely the most famous, but his tales about the basketball coach, the drug store clerk, as well as friends and family, elevate the ordinary events of their lives into extraordinary, memorable stories . . . Has McClanahan led a more colorful life than the rest of us? Or does he paint the ordinary life with technicolor details? Either way, you will laugh.” —Lizz Taylor, Poor Richard’s Books, FRANK.

“I’m sorry, all you lovers of The Natural Man et al., but Not Even Immortality Lasts Forever may be Ed McClanahan’s best book yet. Never again can I say that I don’t laugh out loud—or walk around reciting to the closest human—while reading a book. McClanahan has cornered the market in self–deprecation. This memoir belongs on the same shelf as Nordan’s Boy with Loaded Gun and the works of David Sedaris. What a great, comical joyride by a large–hearted man.” —George Singleton, author of Staff Picks

“To tell about his early years in Kentucky, Ed McClanahan has channeled the voice of Mark Twain and propelled us off to military camp and Southern Gentlemen's college (you will want to read this book just to find out what he did with the dress code there) and even to an extravagant launching party of his parents’ houseboat. From tall tale to artful hyperbole, the verbal wizardry in this fabulous book is tops. McClanahan always has a blast with words, running the language around in circles. He can’t just say 'a humble abode' when 'a humble ensquatment' will do. So much here is fresh and invigorating—and often tender and sweet. His portrayal of his father is especially touching. And there are dogs. I will treasure this memoir forever. It’s immortal!” —Bobbie Ann Mason, author of In Country and The Girl in the Blue Beret

“This is McClanahan at his best . . . McClanahan, a member of the Kentucky Writers Hall of Fame, has a way with words that never fails to tickle readers’ funny bones.” —Carnegie Center staff and friends, Smiley Pete Publishing