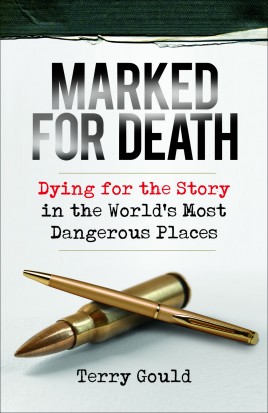 Dying for the Story in the World's Most Dangerous Places

Worldwide, nearly three–quarters of journalists who die on assignment are targeted and assassinated for their dogged pursuit of important stories of injustice. In Marked for Death, Terry Gould brings this statistic to life by documenting the lives of seven journalists, in Colombia, the Philippines, Bangladesh, Russia, and Iraq, who had the guts to keep telling the truth in the face of threats from terrorists, corrupt politicians, gangsters, and paramilitary leaders.

Gould brings us the lovers, colleagues, rivals, critics, and even the accused murderers of these courageous men and women, searching for the moment in which these journalists understood that they were willing to die in order to get a story out.

Their compelling stories highlight how selflessly humans can love justice and their fellow citizens; how dogged and resourceful people can be in attempts to thwart injustice; how vital it is to show the defeated and the indifferent, as well as the powerful; and that there really are some things worth dying for.

Terry Gould is a Brooklyn-born investigative journalist who focuses on organized crime and social issues. He has won forty-seven awards and other honors for his reporting. Gould's previous nonfiction books include Paper Fan and The Lifestyle. Gould spent four years investigating the lives and work of the journalists he profiles in this book. He lives in Vancouver.

Praise
"Marked for Death by Terry Gould is a book of love and passion. The portraits of slain journalists who reported from the world's most dangerous places are unquestionably tragic, but this book is uplifting and even inspiring. Through his meticulous reporting and his compassionate storytelling, Gould performs a small miracle, a literary resurrection, allowing journalists so cruelly killed to tell their own stories completely and honestly. In an age when journalism is threatened by economic collapse and deep public cynicism, Gould's book reminds us that journalism can be beautiful and meaningful and that its power to combat injustice so great that some journalists around the world are willing to give their lives to tell the truth." —Joel Simon, Executive Director, Committee to Protect Journalists

"In an investigative tour de force, Gould brings a level of detail and realism to his descriptions of people and places that makes the book's 400 pages melt away . . . [Marked for Death] should be required reading for anyone who prizes democracy, journalist or not. —Concordian, Concordia University's Independent Student Newspaper (Canada)