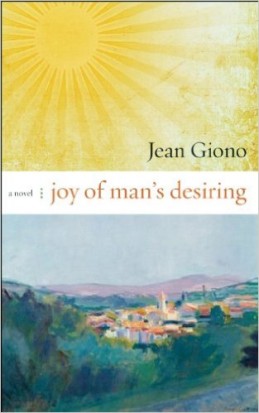 “Peasant civilization possesses as a gift human qualities which philosophical civilizations spend centuries first defining, then desiring, and finally losing.” –Jean Giono
A true forebear of magical realism, French author Jean Giono created men and women rooted in the folklore of provincial France. In this beautiful new edition of the original Que Ma Joie Demeure–literally, That My Joy Remain–he tells the tale of a farmer couple in Haute Provence who find that the spark has somehow gone missing from their lives. One day, a stranger arrives who helps them discover how to rekindle their connection. The stranger tells them, “Youth is neither strength, nor a supple body, nor even youth as you conceive of it. Rather, youth is the passion for the impractical, the useless.” The couple, with this guidance from the stranger, include friends and neighbors on their journey back to individual and collective happiness. They plant fields of flowers, a meadow of grain just for the birds, and they set their horses free. With a poet’s grace and imagination, Giono weaves a grand story of the earth and of passion, of men and women, animals and weather, of the magic we now call the “laws of nature.”

JEAN GIONO was born in 1895, in Manosque, a small town in the southeast of France. He wrote more than fifty books-novels, poems, and plays-including Joy of Man's Desiring, Blue Boy, and The Horseman on the Roof. He died in 1970.

Praise
"In Giono's work is what every sensitive, full-blooded individual ought to be able to recognize at once as the song of the world.'...The philosophy behind this symphonic production has no name: its function is to liberate, to keep open all the sluices of the soul, to encourage speculation, adventure, and passionate worship." --Henry Miller "Giono's sensuous eye for detail, his fine insight into human behavior and the scope and resonance of his language transform every landscape, every encounter between his characters, into an intimate, almost physical experience." --The New York Times Book Review "One of the twentieth century's greatest and wisest novels." --The Nation