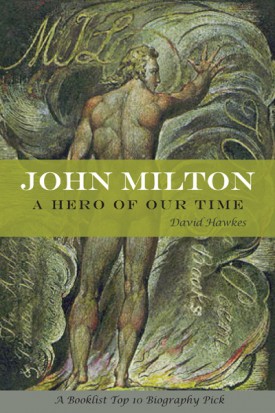 A Hero of Our Time

John Milton — poet, polemicist, public servant, and author of one of the greatest masterpieces in English literature, Paradise Lost — is revered today as a great writer and a proponent of free speech. In his time, however, his ideas far exceeded the orthodoxy of English life; spurred by his conscience and an iron grip on logic, Milton was uncompromising in his beliefs at a time of great religious and political flux in England. In John Milton, David Hawkes expertly interweaves details from Milton’s public and private life, providing new insight into the man and his prophetic stance on politics and the social order. By including a broad range of Milton’s iconoclastic views on issues as diverse as politics, economics, and sex, Hawkes suggests that Milton’s approach to market capitalism, political violence, and religious terrorism continues to be applicable even in the 21st century.

This insightful biography closely examines Milton’s participation in the English civil war and his startlingly modern ideas about capitalism, love, and marriage, reminding us that human liberty and autonomy should never be taken for granted.

David Hawkes was born in Cardiff, Wales and educated at Stanwell Comprehensive School. He has a B.A. from Oxford University and a MA, M.Phil. and Ph.D. from Columbia University. His work has appeared in the Times Literary Supplement, The Nation, The New Criterion, In These Times, and many other popular and scholarly journals. He is a Professor of English Literature at Arizona State University, and has held visiting appointments in Turkey, Japan, India and China, as well as a long-term fellowship from the National Endowment for the Humanities. He lives in Phoenix and Istanbul.

Praise
"The 400th anniversary of Milton's birth provided Hawkes the opportunity to reexamine the great poet not only within a 17th–century context but in a 21st–century one, too. During an era of great unrest in England, Milton provoked controversy and debate over his ideas of sex, economics, religion, and political power systems. Thought to be ahead of his time, Milton frequently declared that he was not solely speaking to his contemporaries but to the people of the future. Here, Hawkes examines Milton's iconoclasm and his belief that the worshiping of images of all kinds, both figurative and metaphorical, was destructive. Interweaving historical events of his time, such as the Rump Parliament of 1649, Hawkes illuminates Milton's philosophy via his prose and poetry. Although contemporary readers may disapprove of Milton's beliefshe was in favor of polygamy and believed God picked "chosen ones" to lead the masseshe never made for dull reading. VERDICT Hawkes writes with little academic jargon, and his style is lively and entertaining. Political and religious history enthusiasts will find this excellent and challenging." —Library Journal