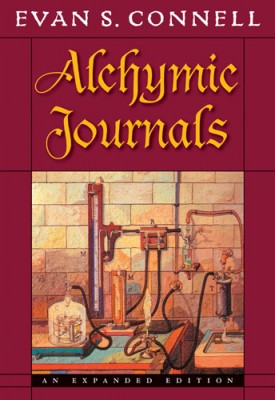 Capturing the spirit of arcane writing, Evan S. Connell delivers spectacular and esoteric prose as he imagines the journals of seven alchemists. The first is Paracelsus, the famous sixteenth–century alchemist, who is followed by an array of distinct voices: physicians, historians, alchemists, and philosophers. Each employs a unique personality and point of view in a world of pre–scientific thought, of the western world about to step into modernity.

Though this historical recreation is medieval in style, Connell succeeds in infusing his diarists with alchemic wisdom, ancient appeal, and felt humanness. A work of rigid art and astute mimicry, Connell’s work is intelligent and remarkable, medieval yet applicable to modernity. Alchymic Journals is, at its core, a study of humanity from the mind of one of America’s greatest writers.