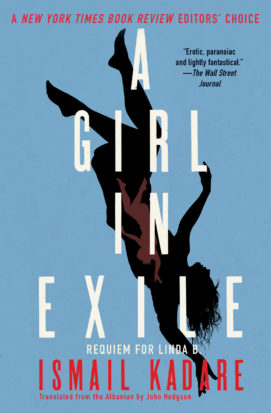 A Girl in Exile

Requiem for Linda B.

“Ismail Kadare’s readers are astonished every year when the Nobel committee overlooks him. . . . A Girl in Exile, published in Albanian in 2009, may rekindle the worldwide hopes.” —The New York Times Book Review

During the bureaucratic machinery of Albania’s 1945–1991 dictatorship, playwright Rudian Stefa is called in for questioning by the Party Committee. A girl—Linda B.—has been found dead, with a signed copy of his latest book in her possession.

He soon learns that Linda’s family, considered suspect, was exiled to a small town far from the capital. Under the influence of a paranoid regime, Rudian finds himself swept along on a surreal quest to discover what really happened to Linda B.

“At a time when parts of the world are indulging nostalgia for communism, Kadare’s novel confronts the infuriating impossibility of art in an autocratic, anti–individualist system.” —The Washington Post

“A Girl in Exile confirms Kadare to be the best writer at work today who remembers—almost aggressively so, refusing to forget—European totalitarianism.” —The New Republic

Praise
Praise for A Girl in Exile

“Ismail Kadare's readers are astonished every year when the Nobel committee overlooks him . . . A Girl in Exile, published in Albanian in 2009, may rekindle the worldwide hopes.” —The New York Times Book Review (Editors’ Choice)

“Kadare’s mellifluous fever dream is a portrait of madness: the madness of the Stalinist state and the madness of men and women in the clamp of the state’s machinations . . . At a time when parts of the world are indulging nostalgia for communism, Kadare’s novel confronts the infuriating impossibility of art in an autocratic, anti–individualist system.” —The Washington Post

“A Girl in Exile is the gripping account of a playwright’s tragic struggle with the effects of his creative work, as understood through political upheaval, narrative interchangeability, and a magnetic relationship . . . Beautifully, the text addresses the cruelties of dictatorship.” —Los Angeles Review of Books

“While common sense says that no artist can overhaul a country’s literature singlehandedly, Kadare has done so . . . A Girl in Exile is the work of a historic talent who is still at the peak of his power. It confirms Kadare to be the best writer at work today who remembers—almost aggressively so, refusing to forget—European totalitarianism. Kadare tackles Albania’s specific strangeness with a ferocious rigor that would feel scientific if it were not for the haunted, haunting humans he writes into being.” —New Republic

“Set among the bureaucratic machinery of Albania’s dictatorship, this compelling novel evokes the paranoid nature of life and love under surveillance.” —Chicago Review of Books, The Most Anticipated Fiction Books of 2018

“Kadare structures the novel like a psychological detective yarn, but one with some serious existential heft . . . A strong study of the ease and banality of human duplicity.” —The Millions, Most Anticipated: The Great 2018 Book Preview

“A brilliant novel that captures the horrors of a totalitarian regime.” —Pittsburgh Post–Gazette

“A compelling amalgam of realism, dreaminess and elegiac, white–hot fury. Kadare communicates with awful immediacy the nature of tyranny and the accommodations that those subject to it must make—as Kadare himself had to do.” —John Banville, Financial Times

“The literature Kadare has produced in the face of obstacles lesser writers would find insuperable, is, genuinely, of world significance . . . Invites comparison with Milan Kundera's recent satire on Stalinism, The Festival of Insignificance. Both writers are favourites, year–in, year–out for the Nobel prize. Kadare will not damage his prospects with A Girl in Exile.” —John Sutherland, The Times

“Melodrama, tragedy and myth illuminate the relationship between individual and state in a fine novel from the great Albanian writer.” —Guardian

“Kadare is frequently mentioned as a Nobel contender, and his chances should only be enhanced by this odd and powerful novel.” —Booklist

“Myth and dream, memory and repression, all converge as the novel illuminates the essence of art in totalitarian Albania. An author respected throughout Europe should reach a wider American readership with this subversive novel.” —Kirkus Reviews

“The novel effectively conveys the era's drabness and repression, providing a timely sense of the constraints imposed by authoritarian regimes . . . A good treatment of repressive politics.” —Library Journal

“Ismail Kadare is one of the most lauded writers–in–translation in the English language, certainly one of Europe’s most important writers, and virtually the singular representative of Albanian culture to the anglophone world . . . The novel is by turns a probing exploration of the strict censures on everyday life—from which coffee shop one drinks at to the friends and lovers one has and the art one makes—under a totalitarian regime, and by turns epic in its connections among the present of life under Hoxha in the 1980s and the ancient past of Western mythology and history.” —World Literature Today

“A Girl in Exile, from internationally acclaimed Albanian author and perennial Nobel Prize favorite Ismail Kadare, is a powerful and complex tale of life in the 'dictatorship of the proletariat' . . . [A] striking exploration of love, art, paranoia, and the limits of freedom in a totalitarian state.” —Foreword Reviews

“A Girl in Exile is both a timeless, ghostly love story, and a trenchant portrait of the artist in a totalitarian state.” —4Columns