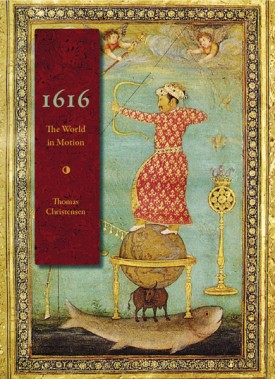 The World in Motion

The world of 1616 was a world of motion. Enormous galleons carrying silk and silver across the Pacific created the first true global economy, and the first international megacorporations were emerging as economic powers. In Europe, the deaths of Shakespeare and Cervantes marked the end of an era in literature, as the spirit of the Renaissance was giving way to new attitudes that would lead to the age of revolutions. Great changes were also taking place in East Asia, where the last native Chinese dynasty was entering its final years and Japan was beginning its long period of warrior rule. Artists there, as in many parts of the world, were rethinking their connections to ancient traditions and experimenting with new directions. Women everywhere were redefining their roles in family and society. Slave trading was relocating large numbers of people, while others were migrating in search of new opportunities. The first tourists, traveling not for trade or exploration but for personal fulfillment, were exploring this new globalized world.

Thomas Christensen illuminates this extravagant age by focusing on a single riotous year. Woven with color images and artwork from the period, 1616 tells the surprising tales of the men and women who set the world on its tumultuous course toward modernity.

Thomas Christensen's previous books include New World/New Words: Recent Writing from the Americas, A Bilingual Anthology, The U.S.-Mexican War, and The Discovery of America and Other Myths as well as translations of books by such authors as Laura Esquivel, Carlos Fuentes, Julio Cortázar, Alejo Carpentier and Louis-Ferdinand Céline. He is director of publications at the Asian Art Museum in San Francisco and lives with his wife in Richmond, California.

"Thomas Christensen's 1616: The World in Motion, is one of those unconventional, unclassifiable, uniquely pleasurable histories that seems to take a narrow path but opens into a fresh, vivid, expansive understanding of a historical moment." —Dallas Morning News

"Thomas Christensen's "1616" is a delight, an adventure, a reading and visual treat of the first order. Once you hold it in your hands, and the sumptuous, well–chosen illustrations fall open, its $35 price–tag will seem like a bargain."—The Cleveland Plain Dealer

"Careful to include events from around the world, not just Europe and the Americas, Christensen enhances his excellent explications of backgrounds and settings with dozens of fabulous illustrations. Most readers will want an atlas to track the action in 1616's "world in motion." —Publishers Weekly (Starred Review)

"Thomas Christensen is no slouch when it comes to writing page–turning nonfiction . . . Christensen manages to portray and connect disparate events with remarkable cogency . . . He also affords his reader a peek into the lives of those who were right there making it all happen . . . Christensen's writing is droll and at times hilarious. He has a wonderful way of juxtaposing his facts so that the ironies often present in human behavior shine through." —The Foreword

"With its stories of restless spirits and restless feet and its truly amazing images from Japan to Persia to Rome, this book will surprise and delight every reader and provide new insights into an interactive early modern world." —John E. Wills, Jr., author of 1688: A Global History

"Shakespeare may have died in 1616 (as incidentally did Cervantes––on the very same date!) ––but here we have Love's Labour Found. A brimmingly generous intellectual feast, lavishly curated by Mr. Christensen––on every page a fresh marvel––the catalog, as it were, of a show just asking to be mounted, and the Show of the Year at that." —Lawrence Weschler

"In 1616: The World in Motion, Christensen conducts a horizontal survey of the world—the entire globe—at a single point in time. With a masterful command of facts and data, he ties together events in a brisk narrative, revealing a world "in motion," vibrant with remarkable solutions, activities, and individuals. He shows how separate threads affected one another, transformed discourse, and contributed to development of a truly global culture fully four centuries ago." —Emily Sano, director emeritus, Asian Art Museum, San Francisco

"Tom Christensen's vividly illustrated 1616: The World in Motion is filled with unforgettable characters and stories that illuminate many of today's global aches and joys. Immersing ourselves in this watershed year reminds us that if we look carefully every year counts, a lesson that can keep us mindful through the passing of our own years." —Peter Laufer, author of The Dangerous World of Butterflies and Forbidden Creatures