WALLACE STEVENS (1879-1955) is considered one of the greatest American poets of the last century. His major works include Ideas of Order, The Man With the Blue Guitar, Notes Towards a Supreme Fiction, and The Necessary Angel. He is the recipient of several awards, including The National Book Award for Poetry, the Frost Medal, and the Pulitzer Prize. 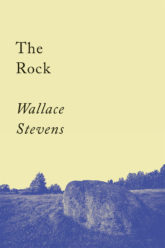