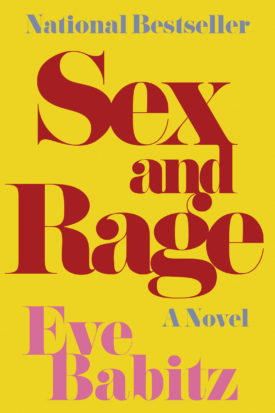 Praise
“Babitz was living proof that rock–and–roll decadence also could be elegant and that muses could be the sharpest tacks in the room. Her writing was so lush and so arch—so sexy and so smart—that she made you believe lush and arch were not mutually exclusive . . . Only Eve could inspire you to buy seven caftans and all the ingredients of a tequila sunrise after reading only ten pages of her books. (Cocaine and caviar were optional.)” —Signature Reads

“Eve's Hollywood is less a straightforward story or tell–all than a sure–footed collection of elliptical yet incisive vignettes and essays about love, longing, beauty, sex, friendship, art, artifice, and above all, Los Angeles. . . . Reading West (and Fante and Chandler and Cain and the like) made me want to go to Los Angeles. Babitz makes me feel like I'm there.” — Deborah Shapiro, The Second Pass

“Eve Babitz is to prose what Chet Baker, with his light, airy style, lyrical but also rhythmic, detached but also sensuous, is to jazz, or what Larry Bell, with his glass confections, the lines so clean and fresh and buoyant, is to sculpture. She's a natural. Or gives every appearance of being one, her writing elevated yet slangy, bright, bouncy, cheerfully hedonistic—L.A. in it purest, most idealized form.” —Lili Anolik, Vanity Fair

“Her writing took multiple forms, from romans à clef to essayistic cultural commentaries to reviews to urban–life vignettes to short stories. But in the center was always Babitz and her sensibility—fun and hot and smart, a Henry James–loving party girl. . . The joy of Babitz's writing is in her ability to suggest that an experience is very nearly out of language while still articulating its force within it.” —New Republic

“Eve Babitz has a provocative and sassy voice, and an intelligent one too. She can seem self–involved but seduces us with her originality. . . Babitz writes about California and particularly Los Angeles the way Woody Allen writes about New York. She is crazy about it; all of it.” —Jewish Journal

“Her voice on the page is no less mesmerizing than her presence in a room. . . The singular spectrum of her adventures, her friends, and her tastes reveal themselves in her unconventional and delightful dedication page(s).” —Nicole Jones, Vanity Fair

“Eve Babitz, whose autobiographical vignettes of LA had an easygoing Mediterranean warmth and acceptance (she didn't billboard over the dark side of LA and Hollywood, she just didn't elevate it into a noir nihilism) that was the antithesis of Joan Didion's desert vision of bleached bones beneath numbed nerves. The pleasure principle still prevailed in Eve's writing, whatever the setbacks and heartbreaks.” —James Wolcott, Vanity Fair

“Her voice manages to be both serious and happy, with a run–on syntax that feels like a friend on her second glass of wine. Relentlessly unsentimental, she sees people for who they are, regardless of who she wants them to be...In Eve's Hollywood, she writes with the aching immediacy of adolescence and the wide–angle perspective of a woman much older –– and she's only in her 20s.” —Holly Brubach, The New York Times

“What truly sets Babitz apart from L.A. writers like Didion or Nathanael West [...] is that no matter what cruel realities she might face, a part of her still buys the Hollywood fantasy, feels its magnetic pull as much as that Midwestern hopeful who heads to the coast in pursuit of 'movie dreams.'“ —Steffie Nelson, L.A. Review of Books

“Eve Babitz is a little like Madame de Sevigne, that inveterate letter–writer of Louis XIV's time, transposed to the Chateau Marmont in the late 20th–Century––lunching, chatting, dressing, loving and crying in Hollywood, that latter–day Versailles.” —Mollie Gregory, L.A. Times

“As the cynosure of the counterculture, Eve Babitz knew everybody worth knowing; slept with everybody worth sleeping with and better still, made herself felt in every encounter.” —Daniel Bernardi, PopMatters

“Her romp through '70s L.A. winkingly fulfills the promises of pleasure and delight so often scorched to nil by writers like Joan Didion.” —Ian Epstein, Vulture